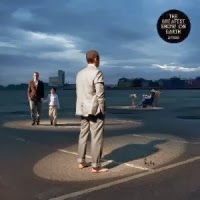 Every once in a while, the feeling of great anticipation washes across a person, and this can be for a huge variety of reasons. One such situation is when a favorite band announces a new album and release date and then the waiting begins. During this time, the mind will throw up questions, such as, “Where have they gone with this one?” and “Will it be as good as, or better than the last album?” and many more. I had this feeling a few months back when Airbag, the Norwegian prog band announced album No 3 , The Greatest Show On Earth, would be unleashed on the world on 4th Nov. Promotional material from the album has already featured on the radio show and received many positive comments. This album follows on from the debut, Identity in 2009 and the follow up, All Rights Removed in 2011, which have steadily built up a very strong fan base. Their music, while influenced by Pink Floyd, Blackfield, A-Ha and Porcupine Tree, is very unique and probably the best description is atmospheric progressive rock.


The evolution from Identity and onto All Rights Removed has highlighted refinements in their sound, producing majestic soundscapes, lengthening tracks and making them slightly darker. As with all good bands, progress is the name of the game and The Greatest Show On Earth shows the band in a heavier and rougher audio scenario.
Airbag is a 5 piece outfit comprising Bjorn Riis (guitar), Asle Tostrup (vocals, guitar), Jorgen Gruner-Hagen (keyboards), Anders Hovdan (bass) and Henrik Fossum (drums), with Henrik joining the band in 2010 and the others being original members when the band started out, back in 2004.

The Greatest Show On Earth is a 6 track album with a total playing time of around 50 minutes. The shortest and longest tracks on the album are part of a suite and are also the opening and closing tracks, “Surveillance Part 1 (2:23)” and “Surveillance Parts 2 + 3 (16:45).”

The Surveillance suite bookends the album with the short Part 1 (2:23), the scene setter for what is yet to come, and has a quiet intro into some heavier bass and drums and some superb lead guitar touches and then it is gone. The more epic Parts 2 + 3 (16.45), similarly starts off in a gentle manner before slowly building. A simple piano passage carries the track along until the characteristic voice of Asle appears, soon to be joined by drums, bass and guitar as the atmosphere intensifies. There are excellent lyrics, a superb melody and a move into the heavier side of the soundscape with stunningly simple guitar playing before the sound drops away to let the listener’s mind go where it will as the musicians paint a superb aural landscape. The track veers from sparse sounds to the driving sound of the band in full flow then leaves in a gentle manner.

Each of the other 4 tracks, “Redemption” (7:02), “Silence Grows” (5:54), “Call Me Back” (11:15) and the title track, “The Greatest Show On Earth” (7:02) are tracks that you want to revisit time and time again. The Airbag sound with that emotion drenched voice of Asle, the stunning guitar work of Bjorn, the unobtrusive but excellent keyboards of Jorgen and the powerhouse rhythm engine of Henrik and Anders just nail it.

The facet that sets Airbag apart from many bands is they incorporate the “less is more” strategy, in that they realize that it isn’t necessary to constantly blast away at the listener and squeeze as many notes into a given space as possible, they allow the listener to relax into the aural landscapes that they engineer with such precision. In short, The Greatest Show On Earth, album No 3 by Airbag, is a work of music that is close to perfection. They have honed their skills over the three albums and followers will welcome this album with open arms and it should certainly attract more than a few new followers to the fold. Adorning the front of this album are both the stickers, “One to Buy” and “The Experience will last forever” and The Ancient One’s advice is to buy the album and experience the majestic music that is Airbag.

Key Tracks: Call Me Back: The Greatest Show On Earth: Surveillance Pt 2 & 3