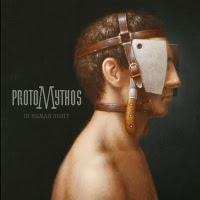 Protomythos is the name used by Tom Treivish, an Israeli born multi-instrumentalist, who has been writing and recording music for over 10 years. In 2011, together with producer, Noam Akrabi, they began sifting through the available material to put together an album. Tom decided that the album should be a concept album, and as he had been a vegetarian since the age of 16 and a practicing vegan for over 2 years, the theme would be the treatment of animals and animal rights. The album that landed on my desk a short time ago, In Human Sight, was released in August of this year and is certainly a very interesting debut album.


Protomythos is literally a one man band, with Tom having played everything on the demo materials, but he did employ the skills of Adi Har Zvi on bass and Ethan Raz took over the drum stool for the album recording.

In Human Sight is a 10 track album with a total playing time of around 54 minutes. The shortest track on the album is track 4, “Inside A Square” clocking in at 4:06 minutes, with the following track, track 5, “The Blind Spot” the longest track running to over 7 minutes at 7:47.

Regular readers of my reviews will be aware of the importance that I attach to the opening track of albums to “grab” the listener and “pull” them into the rest of the album. “In Human Sight” (5:00) is the album title track as well as the album opener and for good measure, is also an instrumental. This is a good solid opener that starts off gently with guitar before the terrific bass and drums join in. The guitar then seems to have an almost rotating riff behind some excellent lead guitar runs, which for the most part are crystal, but sometimes hard chunky chord sections serve to keep the track fresh and moving. A very good starting point to the album generating enough interest to make the listener sit up, want to hear more and move on through the album.

“Cage Bound” (6:30) starts off with a strumming intro into a great melodic lead guitar passage while the drums/bass maintain a steady rhythmic pulsing through the track. The first proper lyrics, there is some chat at the end of track 1, introduces Tom’s very mournful vocals and there are some very interesting lyrics, which can be found on the website. A superb piano puts in an appearance at times adding another layer to the sound and the amazing lead guitar solo just after the halfway point lifts the track up by a few notches. The return of that mournful voice then gives way to that stunning guitar which takes the track out.

The long track, “The Blind Spot” (7:47) is another slow burner to start, and strangely calls to mind the start of Frijid Pink’s cover version of “House Of The Rising Sun,” before venturing quickly into its own memorable theme. Clear vocals against a relatively sparse background move the track along and there is an up-tempo synth driven section around the 2:30 minute mark before the voice returns with those thoughtful, insightful lyrics. Opportunities arise for some superb lead guitar work which Tom gratefully accepts and then the tempo changes suddenly result in the emphasis moving to piano/synths. A repetitive guitar break moves the track towards a finale behind a spoken set of lyrics which are fairly far down in the mix.

This is one of those albums that definitely will find its way into the mind the more times it is played. I’m still not fully inside the concept album structure, and by that I mean that the music is excellent, but I find the overall album doesn’t hang together as you would expect a concept album to do. While I’m not sure of the concept nature of the album, In Human Sight, there is no questioning the superb musicianship that is on show throughout this debut album. Listeners will, of course, make up their own mind, but I would suggest that this album will garner many fans, eager to see where Protomythos travel to in the next release. Settle down to listen to this album and read the lyrics (on the website) as the words excellently convey the theme of the album.