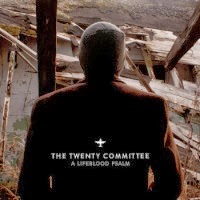 This is another of those bands, that as a reviewer, I get the opportunity to hear, whereas I might not have picked up on them as a simple music listener. The Twenty Committee are a very young band in terms of musical heritage, forming in early 2012.With all the members of the band contributing, they began collaborating on material and doing live shows to build their reputation, and catalogue. They had a terrific break in April 2012 when Neal Morse launched a search for unknown talent to audition for his touring band. One member of The Twenty Committee had the opportunity to perform original material for Neal and to cut a longish story short, the Twenty Committee were soon in the studios (owned by Neal) with a producer who had worked with Neal, Transatlantic and Flying Colors. The result was the album that I am currently listening to for review, A Lifeblood Psalm which was released earlier this year.

A Lifeblood Psalm is a 9 track album with a total running time of around 45 minutes. The shortest track is the final track, and the last part of “The Knowledge Enterprise“ suite, entitled “Finale” at 1:26 minutes and the longest track is “Her Voice” which has a playing time in excess of 10 minutes (10:08).

The Twenty Committee seem to be one of the new bands that fit into the genre, and I do apologize for this as I dislike trying to pigeonhole the style of a band, which straddles both pop and progressive music. Despite seeming like a very strange combination, it does work well in many cases, such as Dynamo Bliss from Sweden and The Opium Cartel from Norway. The music is instantly accessible and then they slide seamlessly into progressive territory with little twists and turns, hence the reference to the pop/prog genre.

The opening track, “Introduction” (1:49) is a bit of a strange one, starting as it does with snatches of random conversations from male and female voices. There is a very simple, but striking, piano melody accompanied by a crystal clear vocal and a wonderful subdued guitar. The conversation part rises back from the background as the track finishes. A short, but very interesting start to the album and does draw the listener into the album.
The first “full” track is the stunning “How Wonderful” (7:03) which is instantly catchy, has a memorable chorus and more of that clear powerful vocal, which in part reminds me of the similar clarity found in the vocals of Aaron Clift (from The Aaron Clift Experiment). This track moves from the more pop sounding opening to a very strong progressive sound with superb keyboards, more of that beautiful melodious guitar playing and a powerful, but unobtrusive, rhythm unit.

“Her Voice” (10:08) is another powerful track, but one which I feel loses its way when it moves from the pop area into a very experimental stage, and which I don’t think works well at all. “Airtight” (5:13) is a very different style with a gentle acoustic setting for the most part and again a very melodious track with a couple of twists toward the end.

The five part suite, “The Knowledge Enterprise” (21:29) is a masterful musical concoction, which although playing as individual tracks, does not distract from the overall flow of the music. The suite contains some wonderful piano and synths, simple but stunning guitar playing, crystal clear vocals and harmonies behind all that the subdued power of the drum/bass unit. The music moves from piano and vocal to full blown band workouts as it ebbs and flows through its 21+ minutes. A bold step on a debut album to include such a piece of work, but one that is really successful.

A Lifeblood Psalm is a wonderful showcase for a new band and despite not taking too many chances by moving away from a relatively safe middle ground, musically speaking, the forays into the further reaches of the progressive areas suggest that the will to do so exists in the minds of these musicians. As to whether they venture further into these more uncharted areas touched upon in A Lifeblood Psalm, the next album will give us the answer, I’m sure. An album that is well worthy of purchase and should have you allocating it a small space on your CD shelf.