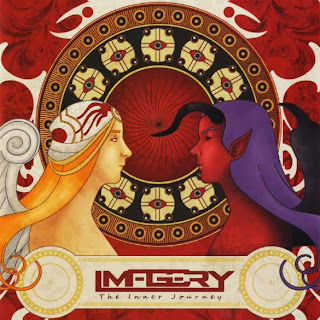 Los Angeles, CA - From the earliest days of human thought, the theme of Duality has been widely debated among philosophers, scientists and spiritual seekers. The ambiguity of the concept still serves as inspiration for endless artistic musings about love and hate, life and death, happiness and sadness. The Brazilian progressive rock/metal band IMAGERY follows these endless seas of intellectual thought to trace their musical identity, personified by the debut album, 'The Inner Journey' released in the U.S. by powerhouse metal label Deadline Music.

Formed in 2008 by Joceir Bertoni (vocal/guitar), Ricardo Fanucchi (bass) and Luciano Neves (drums), IMAGERY was born from the ashes of the bands G.A.F. and Revolt, two groups from the city of Londrina, Parana state. From its inception, IMAGERY had a dual character, combining classic prog rock and metal. The uniting of these two disparate genres was no easy feat. After all, if progressive rock is emotional, heavy metal is visceral; if prog rock is technique, heavy metal is attitude; if prog rock is sensibility, heavy metal is aggressiveness.

And it was in transmuting these opposites – sometimes conflicting, sometimes complementary – that IMAGERY came upon their unique sound. Recorded at PlayRecPause Studios in Londrina under the experienced production talent of Julio Anizelli (Mamaquilla, Terra Celta, Lixo Extraordinário), 'The Inner Journey' brings eight tracks that not only extol the technical ability of the musicians, but, above all, the quality of the band's compositions.

“Fourth Secret” is a perfect prelude and shows the different faces of this dynamic album. The second song, “Imagery,” doesn’t take the name of the band in vain; it is the band’s fingerprint and shows some of their core characteristics, like the absence of compositional patterns. Over the course of nearly six minutes, the song almost doesn’t repeat itself, marking an unreturnable journey through different environments and sonic textures.

Carl Gustav Jung might say that “Perception” is the archetype of progressive metal. However, when IMAGERY play prog metal, they sound like no other band from this style. In this same track it's possible to notice the strong influence of jazz, classical and even Brazilian bossa nova.

Musically, “Start The War” offers a stunning deconstruction of its titular theme, passing from thrash metal riffs to an atonal style. “The Rain” keeps the heaviness in evidence, but never in a minimalist or cheap way. In the musical universe of IMAGERY, nothing is predictable. “Show Me” is an invitation to see the beauty of introspection. Indeed, this song synthesizes the title and the central concept of the album's lyrics that are all based on personal reflections of the musicians.

Joceir Bertoni also shows that he is a consummate vocalist. His unique timbre has an important impact on the musical personality of IMAGERY as a whole. With “Stranger” IMAGERY shows how it's possible to build a heavy metal composition using the main characteristics of this musical genre without sounding cliché. Strategically, “Last” closes the album, and just like “Imagery”, the song embodies the main characteristics of IMAGERY. It doesn’t repeat, but even so it sticks in the mind for hours. “Last” was released as a digital single before the physical release of 'The Inner Journey' – along with the other digital single “Perception”.

The pre-release party of 'The Inner Journey' happened during a historical gig in March of 2012 at Pedreira do Icatu in Votorantim, Sao Paulo state, aside the worldwide progressive legend, FOCUS. More than 3 thousand people attended the event, making it one of the biggest shows of the band’s career – up there with the “Prog Union Tour” that IMAGERY did in 2009 with the veteran progressive band Apocalypse.