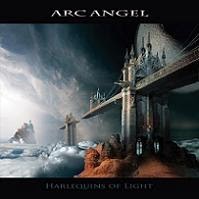 When it comes to a sporadic release of material, the AOR band Arc Angel takes the prize with just three albums in the thirty years since its formation. Led by the creative force behind the 70s progressive rock group Jasper Wrath, Jeff Cannata (lead vocals, drums, bass, keyboards, and guitar) has once again taken up the Arc Angel moniker with a lot of help from some talented musicians, which include Jeff Batter (acoustic piano, synths), Jay Rowe (organ, synths), Scott Spray (bass guitar), David Coe (acoustic guitar), Pete Hodson (background vocals, synths), and Jimi Bell, Gary Maus, Andy Abel, Tony Spada, Mark Proto, and Jay Jesse Johnson on lead guitar. It has been over a decade since Arc Angel’s last release and Harlequins of Light is one hell of a comeback record.


Harlequins of Light is more than just an AOR album as it reaches across over three decades of Cannata’s musical career. This is no more evident than on the opening and title track. The hard rock and progressive elements are out in full force on “Harlequins of Light.”  If you heard just this song, you would not think that it is from an AOR album. Toning it down, “As Far as the Eye Can See” is a more melodic rock song that is reminiscent of the late 70s and early 80s. “War (Battle Wounds of Life)” is a light rock song with a socially aware message. The piano, drums, and guitars all come together to make a magical sound that lets its lyrical message shine through instead of overshadowing it. In keeping with the social and political message of the previous song, “Voice of Illuminati” has a new age mystical feel to it.

“Through the Night” is a ballad that has Cannata’s vocals on full display. A new take on one of his classic songs from his first solo album Images of Forever, “Fortune Teller 2” is so captivating that it might have you pressing the repeat button before going on to the next song.  “California Daze” is a breezy ode to life in the sunshine state. It is definitely a feel-good song. “Tonight… Forever” harkens back to the earlier socially and politically aware songs on the album while infusing a type of New Age mysticism. The progressive elements can be felt on this one.  “Get to You” is a cheery song with an energetic and upbeat melody that is perfect for talking about love.   Based upon the famous ghost ship, “Legend of the Mary Celeste” adds a bit of magic to the story as the piano and keyboards mesmerize.

Harlequins of Light is a must have for fans of Jeff Cannata and AOR. You simply cannot go wrong here. Also, this is the album to take a chance on if you are not that familiar with or particularly into AOR. It’s hard and progressive rock influences make for some fantastic listening.

Key Tracks: Harlequins of Light, As Far as the Eye Can See, Fortune Teller 2