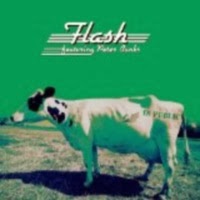 This is a very interesting album to have arrived for review, as earlier this year, I reviewed Flash Featuring Ray Bennett and Colin Carter, an album released 40 years after the last album by Flash. This album, In Public, is a live recording by Flash, from 21st January 1973, and is the first complete live concert by the band to be released thus far. The venue is Kansas City’s Cowtown Ballroom, and The Byrds were also on the bill that evening. The set from that evening features tracks from the first two Flash albums, Flash and In the Can, both released the previous year, and although the third Flash album, Out of Our Hands, would be issued in 1973, none of the tracks from that soon to be issued album, featured that night.

The album has an interesting cover, which does bring to mind the cover of Pink Floyd’s album, Atom Heart Mother, from 1970, in that the main feature is a cow, but this is a link to where the concert took place and there is a reference on the rear cover about “Udder Chaos Live at the Cowtown Ballroom,” which continues the playful theme. The sound on the album, apparently, is directly through the soundboard with no overdubs, as the band was late in arriving due to the weather (snowstorm) and didn’t manage a sound check, resulting in a fairly “raw” sound from the band.

The band at the time of the recording comprised Pete Banks (guitar, synth, backing vocals), Colin Carter (lead vocals), Ray Bennett (bass, backing vocals) and Mike Hough (drums, percussion), although sadly, Pete Banks who had been involved in the release of this live album, passed away prior to it being completed for issue.

In Public is a 7 track album with a total playing time of around 67 minutes although track 1, “Cold Cowtown Night” lasting a mere 20 seconds is really a bit of a tune up introduction. The shortest “proper” track is track 4, “Stop That Banging” which lasts 4:10 minutes, and the final track, “Dreams of Heaven,” is the longest at just under 25 minutes (24:54).

The “proper” opener of the album, “Small Beginnings,” (8:36), coincidentally also the opener from the debut album, starts with a little nod to a Yes style sound, with a guitar riff very reminiscent of Yes, which is not really surprising as Pete had not long left that band. The drummer, Mike, then lets rip with the drums and Pete gives a little flourish on guitar of what is to come. Colin’s vocals have to fight to get on an equal footing with the music, but considering the age of the recording, the sound is very good. The rhythm component of the band, Mike and Ray, are excellent, continuing to drive the track along, and the subtle, and sometimes, not so subtle, time changes certainly grab your attention. The quieter, sedate passages sit well alongside the rawer, rougher workouts and all in all, this is an excellent opening track.

“Black and White” (12:23) is a bit on the heavier side, with a smattering of jazzy workouts, which still shows the great skills of Pete on guitar. “Stop That Banging” (4:10) is a drum solo, which of course was de rigeur around that time, but even at only 4+ minutes, isn’t the most interesting thing on the album. Back into the guitar driven tracks with “There No More” (8:44), a boisterous rendition of “Children Of The Universe” (8:43) which moves along like a speeding truck and onto the concert finale with “Dreams of Heaven” (24:54). This is an extended track from the debut album, dripping feedback at the start and into an almost jam like session involving the whole band. This track is certainly a showcase for Pete, but never to the detriment of the other band members, who contribute their own bits and pieces through the track. Jazzy at times, long bass led passages, swirling guitar and a real tour de force for this relatively short lived superb band, Flash.

I am always very wary about live albums, especially 40 year old recordings, but this was a pleasant surprise. In Public is an excellent album, showing the band in full stride and at the top of their game, and also, for the fans of the band, a magnificent historic sound document of a complete concert. In Public deserves a “One to Buy” sticker on the front and my advice would be to have a listen (or several) to this album, and be prepared to be astonished that such a superb band had such a short life.

A small footnote to remind people that Ray Bennett and Colin Carter are carrying on the Flash name with the album I reviewed earlier this year.