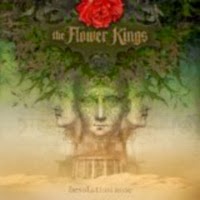 Desolation Rose, the twelfth studio album from the Swedish progressive rock giants, The Flower Kings, didn’t have any time to gather dust once it landed on my desk for review, as it was very quickly into the disc drive and playing. Any release from this stellar bunch of musicians is avidly awaited by prog rock listeners across the globe. The band were formed back in 1994/1995 by Roine Stolt as the touring band to promote his solo album release, The Flower King, but have remained as a band since that point, although there have been side projects by various band members.


The style of music pioneered by The Flower Kings seems to draw strands in from many bands that were around, including, Pink Floyd, Genesis, Frank Zappa, Yes, ELP, King Crimson and Focus, but woven together in a manner that allowed them to stand out above many of their contemporaries. The music would be best classed as symphonic rock, marked with sudden sharp dynamic changes, polyrhythmic, heavy bass lines, superb vocal harmonies, intriguing lyrics, and certainly in the early days, extended track lengths.

The current line-up of The Flower Kings is, Roine Stolt (guitar, keyboards, bass, vocals), Hasse Froberg (guitars, vocals), Tomas Bodin (keyboards), Jonas Reingold (bass) and Felix Lehrmann (drums), with Roine, Hasse and Tomas original members from 1995. Jonas joined the band in 1999 and the newest recruit to the band is Felix, who took over the drum stool only last year.

While The Flower Kings have continued since being formed in 1995, there have been several side projects involving some of the band, such as, Roine being part of Kaipa, Transatlantic and Agents of Mercy, Hasse releasing a couple of albums as Hasse Froberg and the Musical Companion and Jonas has also been involved in Kaipa, The Tangent and his own band, Karmakanic.

Desolation Rose is a 10 track album with a total playing time around a minute short of the hour mark. The opening track, “Tower One,” is the longest track on the album at 13:37 minutes and the closing track, “Silent Graveyards,” is the shortest at only 2:52 minutes. Desolation Rose is an album based around a concept of an angel in a tower, viewing the despairing mess than man has made of everything.

The superb “Tower One” (13:37) opens the album and sets the listener up for a majestic journey through a further 9 tracks of unmistakable Flower Kings music. There is no preamble at the beginning of this track, as the powerful vocals appear in the opening seconds, followed by a passage involving gothic chanting behind a stunning guitar riff. Just over a minute into the track and it is motoring along on all cylinders with guitar, keyboards and that superb rhythm unit all in total harmony. Subtle changes and shifts in emphasis continue, which of course, are Flower King trademarks. Recurring melodic passages continue to imbed themselves in your mind as the track unfolds. Around the 8:30 minute mark the track is literally stripped bare to allow a superb lead guitar passage which then morphs quickly into a typical rock style setting with very forceful vocals, before slipping back into that recurring theme. The listener is certainly taken on a whirlwind of a journey, a rollercoaster of a ride, with fast passages, slow passages, sweeps to one side and then the other, but at the end, an amazing feeling of satisfaction. This is an amazing start to the album and demands that you listen to what follows.

The following track, “Sleeping Bones” (4:17), has more of a feeling of melancholy attached to it, with some stunning, if subdued, playing and vocals that shift from “normal” singing to storytelling narrative style. There is another change of tack on the title track, “Desolation Rose” (4:00), while still in the area of melancholia, becomes almost grandiose with beautiful piano and sweeping vocals before entering into a majestic keyboard passage. “White Tuxedos” (6:31) shows yet another side of the band with simple instrumentation, but powerful, hard-hitting lyrics including bits of narrative from speeches to intensify the emotion. “The Resurrected Judas” (8:24) hints at “classic” retro prog and “Silent Masses” (6:17) is verging on the upbeat. Of the four remaining tracks, both “Last Carnivore” (4:22) and “Dark Fascist Skies” (6:05) take the listener back into the darker side of the music, before the mood lightens with “Blood of Eden” (3:12) prior to the finale, “Silent Graveyards” (2:52), which seems to suggest spiraling into an abyss.

Although perhaps a rather somber concept, this album is a resounding success for The Flower Kings, showcasing all the trademark styles that only The Flower Kings possess and gets both the “One to Buy” and “The Experience will last Forever” stickers on the cover. An album that may need a few listens to fully appreciate, but then the point is reached where the mind simply says “Wow!”