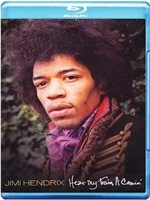 The PBS special airing of Hear My Train A Comin', the story of Jimi Hendrix, is now available on DVD and Blu-ray. For the music fan that needs an introduction to the man’s legacy or the total fanatic, this can be an eye opening excursion inside the life and mind of the legendary performer and musical genius. You will get the scoop through the recollections of close friends, fellow musicians, producers, managers and family members.

For this fan the Blu-ray was an absolute joy to experience. Just when you think you have heard and seen everything there is from a music icon, more information is brought forth and previously unreleased footage for performances are unearthed.

Excerpt From The Hendrix Website: The expanded home video edition of the American Masters documentary Jimi Hendrix - Hear My Train A Comin' unveils previously unseen performance footage and home movies taken by Hendrix and drummer Mitch Mitchell while sourcing an extensive archive of photographs, drawings, family letters and more to provide new insight into the musician's personality and genius. Recently uncovered film footage of Hendrix at the 1968 Miami Pop Festival is among the previously unseen treasures featured in the documentary.
You have your choice of the Blu-ray or the DVD, both are exceptional in quality. Several concerts are included in 5.1 surround sound including the Miami Pop Festival, New York Pop Festival, Love & Peace Festival and Jimi and the Experience performing “Purple Haze” on Top of the Pops in black and white.

Viewers are informed prior to watching the concert footage whether or not it was professionally recorded or filmed. For instance The Love & Peace Festival has a home video quality to it so you are not anticipating something extraordinary. With that in mind however you must know that what is offered here are some real buried treasures of rock history found on this comprehensive set. In fact, if you happen to be a big Hendrix fan or are interested in one of the true innovators of the electric guitar then this is a must have purchase. I know I walked away feeling like I knew the man better than ever after hearing what everyone that knew him personally told their stories.
Altogether this is a worthwhile addition to any music fans collection.