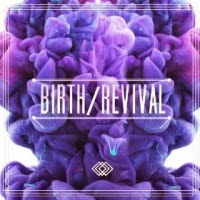 This band is very definitely a mystery, as even with the huge power of the internet at my fingertips, and having trawled through this site and that site, I have only accumulated some sparse information about the band Magg, with the bands own website still under construction at the current time. Magg is a Mexican progressive rock band from Cancun, and recently released their debut album, a double, Birth-Revival, upon the musical world.


Magg is composed of 5 members, who are either very shy or wish to continue to exude the air of mystery at the moment, as they  simply go by their first names. Ivan (bass), Sergio (drums), Yito (guitar), Luis (keyboards) and Alfred (vocals) form the band, and I was even unable to find the date of the origin of the band.

Birth-Revival is a double album containing a total of 13 tracks, 8 on Birth and 5 on Revival, with a total playing time of around 93 minutes. The longest track, “Chinese Room,” is the opening track to disc 2, Revival, and runs on to stop the clock at 14:05 minutes, with track 7 from disc 1, Birth, the shortest at 2:43 minutes.

I have always been a firm believer in the importance of the opening track which has to immediately engage the listener and ensure that the listener then wants to hear all that follows. ”Mind’s Conflict” (5:33) on the Birth disc, has that burden placed on its shoulders. The track opens with a wall of noise and the listener is catapulted immediately into the musical cauldron that is Magg. Visions of Hawkwind and Deep Purple float through my mind as the track continues to unfold. Heavy riffing guitar, thunderous bass, almost imperceptible keyboards, drumming that edges perilously close to being metronomic, which regular readers will be aware, I am not particularly partial to, and vocals to match the band’s power. While allowing the guitarist to lay out his wares, the track doesn’t show that vital factor that should grab the listener. Once the track is complete, it doesn’t leave a particularly memorable riff in the head of the listener.

The first hint that Magg have a little more in their musical armory than just “heavy” prog, shows briefly on track 3, “Golgotha” (6:57) with soaring guitar, almost melancholy styled keyboards and a vocal that shows a very good range.

“Silly Wisdom” (8:05), “Beyond” (5:21), “Destroy The Darkness” (5:11) and “Red King” (2:43) all have the “lets squeeze as many notes as we can into as small a space as possible” scenario, which leaves this listener wondering which of these tracks was which. The closing track of disc 1, “Rain” (8:45) continues in this style, but there is a section where the blistering tempo drops, the passages are more relaxed and less frenetic, and the track has a little more chance of embedding itself into the listener’s mind.

The opening track on the second disc, “Chinese Room” (14:05), is certainly a very interesting track which goes through a variety of passages from the “heavy” prog to the more relaxed style and seems to work all the better for that. “Vineyard” (7:11) has an instantly memorable keyboard riff which marks it out as different and it is a standout track. This style then all changes with “The Flying Circus” (7:28)  which returns to the machine gun guitar sounds and soaring keyboards, but is definitely into the more wall of sound area. The last track, “The Ladder” (10:55), is again one that tends to show the same style that has permeated through disc 1.

The musicianship is very good, but I think that there is a very good single album on display, although it is well hidden in the melee of tracks across the double album. Birth-Revival is an ambitious release as a debut album, and while there are good sections, I feel that it required a firmer vetting process to be more successful. As I always like to mention at this time, this is a very personal view and I would urge people to give Birth-Revival by Magg, a few listens, and it may well be exactly what you want to hear.