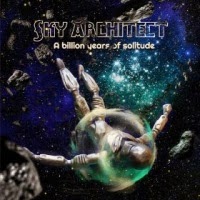 Sky Architect, a Dutch progressive band, have just released album number 3, A Billion Years of Solitude, following on from the debut release, Excavations of the Mind (2010), and the follow-up, A Dying Man’s Hymn, (2011). Having featured the band on the radio show, I was keen to hear where this release would take the band.

The inspiration for this album comes from vintage science fiction and the musical themes deal with space travel, wormholes and supernovas. A Billion Years of Solitude certainly has a bit more weight and depth than the previous albums and it appears that the band have taken a bold step through the door which has the sign “Daring and Inventive” emblazoned upon it. The music represented here, certainly gives a little nod in the direction of bands such as, Genesis, Porcupine Tree, Hawkwind, Gentle Giant, Pink Floyd and King Crimson at times but the overall sound is that of Sky Architect undergoing a musical evolution.

A Billion Years of Solitude is a 7 track album with a total running time of around 61 minutes. The shortest track on the album is track 5, “Jim’s Ride To Hell,” an instrumental clocking in at 2:28 minutes, while the longest track is the epic opening track, “The Curious One,” which runs on for just over 18 minutes. (18:06)

The opening and closing tracks of A Billion Years of Solitude are lengthy epics that “bookend” the remainder of the tracks. “The Curious One” (18:06), opens the album and is a giant slice of the space rock/heavy prog cake with swirling waves of mellotron, and other keyboards, over a superbly tight rhythm unit, with some great edgy guitar work and excellent vocals. This track is a hugely atmospheric piece of music which leaves the listener on the horns of a dilemma. On one hand, the track demands to be replayed immediately, while on the other it points the way for the other musical treasures about to unfold.

The following track, “Wormholes” (5:53), also carries a large bracketed part to its title, “The Inevitable Collapse of the Large Hadron Collider,” which is certainly a thought provoking idea. Musically this track is a little more on the rockier side than the opening track, probably winking its eye in the direction of Spock’s Beard, and allowing Wabe Wieringa, the guitarist, to show his expertise. “Tides” (3:25), is one of the shorter tracks, which effortlessly veers from heavy prog into the acoustic area with ethereal vocals and then dives back into the heavy prog. The second track of the trio of 10+minute epics is “Elegy Of A Solitary Giant” (10:43) and reintroduces the listener to the mighty mellotron flights and almost shouts space rock at you, placing it into the area so loved by Hawkwind and Nektar enthusiasts. A short but powerful instrumental track, “Jim’s Ride To Hell” (2:28) carries the listener on and into “Revolutions” (8:00) which again highlights the superb keyboard skills and guitar gymnastics of Rick van Honk and Wabe Wieringa respectively. This track weaves mesmerizingly from in depth prog rock to the highest level of atmospheric, ethereal space rock and back again.

A Billion Years of Solitude is brought to a close by the other long track, “Traveller’s Last Candle” (12:35) which again allows the band to paint exquisite aural atmospheric soundscapes and then soar into space rock and into heavy prog, all with seamless ease.

A Billion Years of Solitude is an album that requires a fair amount of listening before the music on offer can be fully appreciated, but it is worth the work to get to that point. Sky Architect should be applauded for taking off in a slightly different direction and commended for being both daring and inventive. This is a change in style from the previous albums, but is a successful foray into less familiar territory.

The album, A Billion Tears of Solitude, just fails to gain the highest accolade available, but still earns one of the stickers available, that being the “One to Buy” sticker. My advice is to get hold of this album, then be prepared to work a little when listening to it, before getting the reward of realizing that this is an album which is a cut above many other releases.