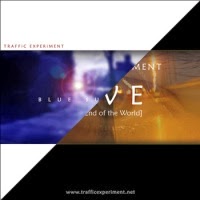 This week the review is of Traffic Experiment, a UK based Progressive art rock band. The band utilize elements from a variety of sources including, prog rock, electronica, funk and acoustic to carve out their own niche in what is becoming increasingly referred to as cinematic rock. Some examples of other bands in this genre would be Gazpacho, from Norway and Lebowski, from Poland. Traffic Experiment formed back in 2006 and was soon working on a debut album, which had, in effect been written prior to the formation of the band. This initial release, Blue Suburbia, eventually surfaced in 2010 with the time scale being extended due to the band having an involvement in all aspects of the album release, from the artwork onwards.

Traffic Experiment returned to the studios in late 2013 to record a reworking of the “Dr. Who Theme,” but it was the studio time that they booked in December 2012 that resulted in this little package currently for review. The musicians gathered in Stevie Winwoods’ studio, together with other musicians to rework some of the original album and also film the entire sessions.

The review is therefore being carried out on the Blue Suburbia Special Edition release which is a 3 disc set containing the original Blue Suburbia release, a live disc entitled Live (at the End of the World) and a Blu-ray disc of the recording. (The Live disc carries that subtitle as the recordings were carried out around the time that many people had predicted would be “the end of the world”.)

Traffic Experiment is a three piece band, comprising Stuart Chalmers (guitar, vocals and composer), Tom Vincent (drums) and Simon James White (bass), but they were supplemented in the studio by guest musicians. The additional musicians were Harri Norris (who did the original 2010 release vocals), Mitch Gasser (guitar), Phil Burns (Hammond Organ, synthesizer), James Holloway (piano) and Claire Turner (vocals).
The audio discs contained in this pack, the original 2010 disc and the Live disc have an array of tracks with the Blue Suburbia disc having 11 tracks with a total playing time of around 71 minutes, and the Live disc comprising only 5 tracks, having a total running time of around 43 minutes. The shortest track on the studio album is “Home and Dry” at only 44 seconds with the last track, “The Crimson Sky at 5am,” the longest, at 10:01 minutes. The live album has slightly amended versions of some of the tracks from the studio album, the shortest being “Once More (with feeling)” at 6:36 minutes and the longest, is still the track, “The Crimson Sky at 5am,” at just under 2 minutes longer than the original, 11:51 minutes.

The studio album starts with “Heavy Braking” (7:49) and highlights the skills of all the musicians involved with superb bass playing, keyboards, drumming, some excellent guitar work and great vocals. An almost blues like atmospheric arrangement permeated the track and it seems to be over much quicker that it’s 7+ minutes would suggest, forming a perfect “jumping-off” point for the rest of the album.

As the listener progresses through “Once More (with feeling)” (6:33), “The Astronomer” (8:39), “Vacuum” (2:04) and “Sirens” (9:51), the journey is half completed and although the tracks vary in tempo and power, the overall impression is of the high level of musicianship that categorizes every part of the album thus far.

Into the second part of the album and a gentle acoustic start to “Ghosts and Shadows” (5:49) eases the listener into the remaining tracks. This gentle, almost laid back style carries on through “The Weight of the World” (6:26) and “Enlightenment” (7:10), before the short, but stunning “Home and Dry” (0:44) leads to the penultimate track, “Lucky Stars” (5:54) with an almost dreamy ethereal feel to it. The final track, “The Crimson Sky at 5 am” (10:01) is a slow building track which initially carries on from “Lucky Stars” style, then lets the band build the sound, with drums, bass, keyboards and guitar producing a sublime track to end this stunning album.

The Live album is literally a step up from the studio album and seems to have a greater intensity to the sound, to the point that it is difficult to determine that it is indeed, a live recording .The five tracks contained on the album seem to have taken on a new dimension, each surpassing the studio versions, culminating in a simply majestic version of “The Crimson Sky at 5am” (11:51) which is around 2 minutes longer than its studio counterpart.

The Blue Suburbia Special Edition is a stunning release that certainly gains both the “One to Buy” and “The Experience will last Forever” stickers and should find a place in almost everyone’s collection. Take the time to marvel at the musicianship, the production and, the amazing band that is, Traffic Experiment. The only confusing aspect of listening to this release, is why did the original album release in 2010, fail to gain more attention?

Key Tracks: The Astronomer: Enlightenment (live): The Crimson Sky at 5am (live)