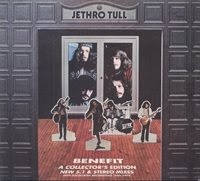 I have been having the time of my life lately immersing myself in the world and music of Jethro Tull. I got the 4 DVD concert set for Christmas, then prior to that received a recent book that was published about the band (which I am currently absorbing), and now I have the pleasure of taking in another remastered JT album. Again Steven Wilson was hired to come in and give their classic Benefit release the full treatment.

Benefit was originally released in 1970 prior to them becoming international stars with Aqualung. The general feeling among longtime fans and rock historians is that Benefit was a greatly underappreciated and overlooked studio recording. One would have to agree that this is not one album that immediately comes to mind when the discussion is around Jethro Tull. This release will force a lot listeners and critics alike to pay more attention.

After listening to this incredibly good remastered recording I would have to say it was a great way to set up the band’s fan base prior to unleashing Aqualung. I think this album is an underrated classic much like the wonderful War Child. Of course this is a matter of opinion from a fan that has been listening to them since the 70s. This set is a tri-fold book style package that includes the original recording on one CD with five bonus tracks, the second disc includes newly remastered versions of rare tracks and singles recorded around the same time as Benefit, such as "Sweet Dream" in both stereo and mono. To some the repetitive nature of this format with various versions may become tiresome nevertheless it is interesting to hear the different variations.

The DVD is audio only, sorry no videos, which is available exclusively with this version. It is packed with 58 tracks, including the album and bonus tracks in 5.1 surround sound, which are absolutely amazing. It also contains the U.K and U.S. versions of the album. The American version was sequenced differently and replaced the U.K. track "Alive and Well and Living In" with "Teacher." In addition the ultimate version is in detailed 5.1 surround sound. So many things that you never heard or noticed before will come popping out with a roar saying “Listen to me!” The package also includes an extensive booklet that is a very interesting account of the recording sessions and events surrounding it with input by band members and others in the entire process.

“Teacher (US album version) (stereo)” is one of the many bonus tracks. It offers more substance and fullness than its apparently understated UK counterpart even though Wilson mentions in the liner notes that they were both taped at different pitches and that has been corrected to reflect the original intent of the sound, I still hear a difference between the two. As he mentioned, one of the versions was more ponderous, I believe it was the UK version, it sounds more subtle compared to the US version. Well, everyone’s ears are different and I doubt there are ears in our universe like Wilson’s otherwise why would he be doing this in the first place?

Moving on…“A Time for Everything? is a shining gem. It illustrates the evolution of the band and a precursor of what was to come. Wilson did a nice job bringing out Martin Barre’s guitar on these tracks and I found it to be more noticeable and quite ear catching. “To Cry You a Song” is a hands down classic and it also receives the justice it deserves, as does the entire album in its entirety to be perfectly honest.
It is a lot of fun to compare and contrast all the different formats that are offered and the realization of how complex and diverse the band had become really hits home now more than ever. It does not come as a surprise that prog’s old guard is turning to one of the younger more brilliant artist in the genre to remaster their music. King Crimson did it now its Jethro Tull’s turn. I wish they would have had Wilson on board the team when they started all the remastering of their catalog years ago. No need to worry, I am sure there will much more to come and I stand ready to open my ears to whatever is next. I really did not think it was possible to appreciate this band more than I did but here I sit again feeling like there is always something new to hear and enjoy with each newly packaged release that finds its way to me. There is nothing here not to like if you are JT or prog rock fan.

Key Tracks: A Time for Everything?, To Cry You A Song, Teacher (US album version) (stereo)