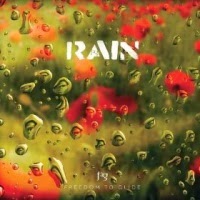 I first came across the band Freedom To Glide early in 2012 when they issued the Rain EP, a 3 track release, which also served as a taster for the full Rain album which was being worked on. Later in the year, another taster appeared in the form of the 6 track mini album/EP entitled The Wait. A year after the release of this second taster, the full Rain concept album was released. The concept that runs through the album is that of the futility of war and the album paints an almost chilling aural landscape of the First World War (WW1).


Freedom To Glide is a band comprising two members, Pete Riley (keyboards, backing vocals, sound effects) and Andy Nixon (lead vocal, guitar, fretless bass, keyboards, drums and drum programming) and for this debut album, Rain, they are joined by Steve Bell (trumpet solo), Francesca Genco (additional vocals) and the Elation Community Voices Choir. Pete and Andy met while members of the Pink Floyd tribute band, Dark Side of the Wall, and started to put together music which would ultimately result in the Rain album, which was over 3 years in the making.

Dealing with such a weighty concept has been very sympathetically carried out with the music throughout the album conjuring up the fears, anger, frustrations and human relationships that had to be dealt with. The lyrics are very powerful, for example on the opening track, “Rain,” “So my brothers fell like rain, every raindrop bears a name” and they continue to be as hard hitting throughout the album. Use is also made of some of the reminiscences of Pete’s grandfather, Corporal Robert Wilson, which made the production of this album a very personal journey.
Musically, the band certainly show a nod towards the sound of Pink Floyd, but there are also hints of Porcupine Tree, and the more Celtic sounds of bands like Clannad, but probably more similar to that of Iona. Similarities aside, the blending of these influences results in a sound which best described as the sound of Freedom to Glide.

Rain is a 15 track album which has a total playing time of around 63 minutes, with track 11, “Trying To Grow Young,” the shortest at under a minute, 0:34 seconds and the preceding track, “When The Whistle Blows,” the longest track at 8:21 minutes. With Rain being a concept album, it is difficult to highlight some tracks over others as they all contribute to the flow of the concept, but I will concentrate on three specific tracks.

Opening tracks, I feel, are the most important on an album to grab the listener right from the start. “Rain (part 1)” (5:45) does this by creating a mood prior to the music fully appearing. There are little sound effects before a swathe of keyboards forms a backdrop to chatter and soldiers voices before a stunning lead guitar passage by Andy leads into crystal clear vocals with simple, hard hitting lyrics. Strumming guitar and a piano background then evolve back into that lead guitar passage. The chorus, part of which I quoted earlier paints the stark reality of what was happening. “Rain (part 1)” is a stunning opening track which then merges into the second track.

The long track on the album, “When The Whistle Blows” (8:21) is a piano driven track at the start, with just the piano and that powerful clear voice, again delivering those “to the point” lyrics. Slowly the song picks up bass and drum, with an exquisite little bass run every so often, then back into the stark opening passage.  More of that superb lead guitar around the 3 minute mark carries the track on and into a narrative telling part of a story of Cpl. Wilson’s experiences. The haunting lines “You’ll only hear/see/read what we want you to hear/see/read” followed by “When The Whistle Blows” really strikes home although it is such a simple statement. The tempo changes around 5:30 minutes to a strumming acoustic guitar plus a little more narration and a different emphasis on the vocals, again backed with excellent piano runs in and out in the background. There is a drop to an eerie silence, punctuated by a soldier shouting, and then the strumming restarts. The track goes out with more “direct” lyrics interspersed with narration and it is gone, but leaves a lasting impression on the listener.

Now a bit of a cheat for my third track, because it is two tracks which merge and send shivers down this listener’s spine. “Trying To Grow Young” (0:34) and “Rain (part 4)” (3:01) create such a powerful soundscape by being so simple. “Trying To Grow Young” is a short comment powerfully sung over the choir in the background and leads into the recurring theme of “Rain,” this time part 4 of the title. The difference is in the percussion sound behind the vocals which becomes more marked as the rest of the instruments fade away and the male voice is replaced slowly by the Elation Community Voices Choir until they themselves simply fade away repeating the line, “So My Brothers Fell Like Rain.” This track is simply an amazingly powerful statement and for me, is the center point of this stunning album.

Three years in the making, Rain, is a superb album which has music which effortlessly flows throughout the 63 minutes, with swathes of keyboards, stunning lead guitar work, majestic piano passages, catchy acoustic guitar work and that crystal clear powerful voice. Above all, the concept dealing with the futility of war is dealt with sympathetically throughout and it must be one of the most emotionally tinged albums I have heard, and after letting the hour plus sink in, I hit play again. Go out and buy this album, (which gets both “One To Buy” and “The Experience will last Forever” stickers) settle down,  listen to it completely and marvel at what Freedom To Glide have produced.


Tracks:
Rain (part 1)
Anywhere Else But Here
Path Of Reason
Riders On A Wave
Price Of Freedom
LU2
Rain (part 2)
Angels and Stones
Wind and Gales – Rain ( part 3)
When The Whistle Blows
Trying To Grow Young
Rain (part 4)
Home Again
One Hundred and Twenty
Not a Broken Man