Review: XNA-When We Changed You 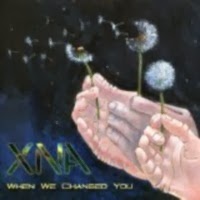 Landing recently on my desk for review was the debut album by XNA, entitled When We Changed You. I was aware of this band, having gleaned a tiny bit of information in a prog magazine about them and also streamed a track from the debut, and was very keen to hear what the band had achieved on a completed album. This debut recording is the culmination of several years of work and sits firmly in the style of the classic greats of prog music, including Genesis, Gentle Giant, Yes, Dream Theater, ELP, Spock’s Beard, The Flower Kings and Jethro Tull. XNA’s sound could be described as symphonic, cinematic rock, but with a unique quality that marks it out as more that simply musical plagiarism.

XNA is a five piece band, founded by David Hussey (vocalist of the Genesis tribute band, Gabble Ratchet) and Adam Malin (keyboards and composer of several solo sci-fi rock operas), together with Danny Bryle (guitars), Scott Connor (drums, percussion) and Billy Sherwood ( bass, additional guitars). Billy Sherwood, of course, is well known for his involvement in many prog projects and was also involved in the production of When We Changed You. Since the recording of the album, there have been changes within the band with John Thomas replacing Danny Bryle on guitars and Jeff Bird taking over the bass duties from Billy Sherwood.

I always feel that the opening track to any album has a huge weight on its shoulders, as it is the gateway to what the rest of the album has to offer. “At Childhood’s Beginning” (2:01) is the opening track of When We Changed You and retro sounding keyboards lead this track in, combining quickly with drums, bass, synths and a great lead guitar. It simply motors along for its 2+ minutes and whets the appetite for the upcoming tracks.

The title track, “When We Changed You” (7:19) is again heralded by those majestic keyboards and sensitive guitar themes before the powerful vocals enter. There are sweeping time changes and styles which serves to highlight the skills of the musicians involved. The movement from powerful soundscape effortlessly into the gentle, melodic side of the music succeeds in maintaining the listener’s interest. “The Flying Dutchman” (9:28) changes tack with a very nautical feel and a narrative style vocal which I did initially find a little unnerving, but after several plays, it has become a fitting style of presentation for this track. Following on, “The Vale of Avalon” (7:08) sets the imagination searching for an island paradise to fit the initial soundscape and again the mainly spoken style vocal becomes very powerful and insistent as the track ebbs and flows. The grandiose “Annapurna” (8:29) with its very eastern feel and similar styled vocals, is driven along by the tight knit band of musicians with some amazing flashes of keyboards and guitars.

The two “epic” tracks, “Banner of the White Boar” (15:03) and “At Childhood’s End” (16:06) are indeed tracks that make you stop in your tracks. “Banner of the White Boar” has an almost medieval structure throughout but features great swathes of keyboards, including harpsichord, guitars and the lyrical storyline is excellent. The sheer power provided by the bass and drums is very dynamic, as it is on all tracks. This track has already featured on the radio show and garnered some very favorable comments. “At Childhood’s End” (16:06) is the final track and sees the band flexing their collective muscles on a stormer of a track, seamlessly veering from the powerful audio scenarios to the most gentle of passages. This track draws the listener in and it is hard to believe that at its completion, 16 minutes have passed, so immersed have you become in the soundscape being presented.

As a debut album, When We Changed You is a stunning piece of work, and the more times you listen to the album, the more you become aware of the superb skills shown by those involved. The ability to create a retro style, but to make it sound so good and modernistic in its approach is simply amazing. My advice is to get hold of this album, clear enough free time to really settle back and listen to it in its entirety. When We Changed You has both the stickers, “One to Buy” and “The Experience will last Forever” and they are well deserved.

Key Tracks: Banner Of The White Boar: The Flying Dutchman: The Vale Of Avalon

At Childhood’s Beginning
When We Changed You
Banner Of The White Boar
The Flying Dutchman
The Vale Of Avalon
Annapurna
At Childhood’s End
By Keith "MuzikMan" Hannaleck at January 12, 2014