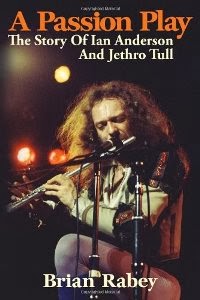 A Passion Play The Story Of Ian Anderson And Jethro Tull by Brian Rabey hit my desk prior to the winter holidays last year and I could not think of a better early Christmas gift. I was getting ready to review the latest incarnation of reissues for Benefit and then hoping to see the Around The World Live 4 DVD set underneath the tree. I did get it and have most recently made my way through the extensive concert footage and interviews. Being immersed in the world of Ian Anderson and Jethro Tull is a choice that has led to tremendous enjoyment for this music fan.

When I had the chance to read a comprehensive story based on the career of the band and their colorful leader I of course, jumped at the chance.

The book allows fans insight into the band members from the early days forward. It is an interesting take on their personalities and own views on how they felt about being in the band at the time and how their relationships worked inside the JT community. What I found enlightening is how the author brings forth the brilliance of Ian Anderson as a writer, musician and all around leader and businessman. The business side was an aspect that gradually became part of Anderson’s responsibilities in order to preserve their catalog and insure everyone was taken care of from a financial standpoint. These are areas that most music fans generally do not care about but it was interesting to watch the development of the band and Anderson as the rock steady leader throughout their career up to present day. I do not think Jethro Tull would have existed beyond a few albums without the music and business sense of someone like Anderson.

As all Jethro Tull fans know there have been two constant members throughout the years, Ian Anderson and Martin Barre. Barre was not on the recent TAAB2 (Thick As A Brick 2) release which surprised many of us however as usual Anderson was able to carry on with some fine musicians and keep the Jethro Tull trademark sound alive and well. This is something that was always counted upon throughout the years and due credit must be given for that kind of consistency, hindsight and vision.

Anderson revolutionized the use of the flute in rock music and it must be noted even though he is famous for that, and one of the few names that come up when addressing flute players in rock music, the fact remains that he is a fine guitar player as well. This point is clarified in the book.

Many things come to light while reading this book and I thoroughly enjoyed it. My appreciation for Ian Anderson and Jethro Tull continues to grow every year. If you are looking for something more than the “The Making Of” footage from the reissued back catalog by the band, this book will give you great insight into how it all came together and what transpired to make them international stars.