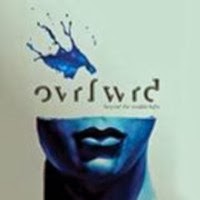 This is the first time I have been sent an album to review and found myself struggling a little with the band name, OVRFWRD, but at least I don’t have to pronounce it to review them. It also tends to catch the attention on the cover of the album. The album is Beyond The Visible Light and is the debut album from the band that was formed in 2012.

OVRFWRD is a four piece instrumental/art rock band that has stated their influences as Pink Floyd, Mahavishnu Orchestra, Iron Maiden. Rush, Yes, Joni Mitchell and Django Reinhardt among others, so they have a very diverse set of influences. The band comprises, Rikki Davenport (drums, percussion), Kyle Lund (bass), Mark Ilang (guitars) and Chris Malmgren (keyboards), and the band came about literally by chance. Rikki and Mark had talked about an instrumental band, while part of another band, and when their vocalist failed to turn up at a recording, the die was cast. With Kyle and Chris, the band recorded a track and have now completed and released the full album.

Beyond The Visible Light is a 5 track album which has a total playing time of around 47 minutes. None of the tracks really fall into the “short” category, although “Can We Keep The Elephant” is the shortest track on offer at 8:03 minutes with the longest track, “Raviji” clocking in at 11:18 minutes.

As an opening track, “Can We Keep The Elephant” (8:03), is instantly memorable, simply for the title alone. The band are off and running very quickly at the start of this track and into an interesting passage with keyboards leading into a strumming guitar. All of this is underpinned by an extremely solid rhythm unit provided by Rikki and Kyle. Mark shows that he is an excellent guitarist and those terrific keyboards from Chris are always there or thereabouts. A couple of minutes into the track and the tempo drops to strummed guitar on its own, before the other 3 group members rejoin proceedings, maintaining the slow gentle melodic nature of the track, which then morphs into a neat jagged guitar riff backed by some  insistent keyboards. This bit of interplay between guitar and keyboards continues to carry the track onwards and returns to the original starting theme which takes the track out. This is a good solid start to the album, with enough light and dark to help maintain the interest of the listener.

“Stones of Temperance” (8:49) has the guitar riffs interplaying with a superb piano passage, before a tempo change introduces a stunning acoustic guitar section. “The Man with No Shoes” (10:48) has a similar configuration of guitar/piano which moves into synths and a more jagged guitar playing area, allowing Mark to show his skills further, especially on those slower sections. The final track, “Dark Star” (8:56) has a simple guitar keyboard passage introduction which slowly builds and the tempo switches up a gear. The keyboards become replaced by that superb piano before the guitar gets a bit looser and drives the track along with the rest of the band contributing to the gradual increase in build-up to see the track make its exit.

“Raviji” (11:18), the longest track on Beyond The Visible Light, and the first track that the band recorded, is a slow burner at the start, with a “little bit more grunt” as it hits the 4 minute mark, with superb guitar/keyboard interaction before a stripping away of everything leaves a solitary piano and a passage which is simply sublime. A gentle acoustic guitar joins the piano to keep things moving along until the rhythm engine sneaks in to add a little more “oomph.”  Bits of slightly distorted guitar appear, but I didn’t feel that they added anything to the track, indeed they seemed to detract a little from what was going on. A sudden tempo change is an indication that the track is close to finishing and it goes out with more piano.

Beyond The Visible Light is a good debut album which has passages that grab the listener and there is no doubt that there are four very able musicians on show. My only concern, and regular readers of my reviews will be aware of this, is that to fully engage a listener over the course of an album, an instrumental album needs something unique to grab that attention. Although I enjoyed all 5 tracks, I did tend to find that my attention either drifted or looked for a vocalist to vary what was happening at times, and while I will definitely dip into the album again and again, it isn’t an album I would put on and listen from start to finish.

Key Tracks: Can We Keep The Elephant, Raviji, Darkest Star


Tracks:
Can We Keep The Elephant
Stones Of Temperance
Raviji
The Man With No Shoes
Darkest Star


Sell your beats online at ReverbNation.com
By Keith "MuzikMan" Hannaleck at February 09, 2014