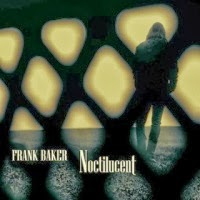 Frank Baker is a name I certainly wasn’t familiar with when Noctilucent, his first album under his own name, landed on my desk for review .He has produced music under various names as side projects such as Meadowy Temple, Landcold and Ociraa. Frank is a solo artist and record producer from Southern Germany and he describes his involvement in music more as a “sound architect” building audio-visual landscapes rather than “singer-orientated” songs. He places his material loosely into the prog rock area, but with heavy influences from cinematic areas and ambient sound. It certainly sounds like an interesting background to the production of the album, Noctilucent, and I was keen to hear what was on offer.

Noctilucent is a 10 track album with a total playing time of around 41 minutes, with the closing track, “The Avalanche Pt 1,” being the shortest at 1:10 minutes and track 4, “The Court of the Hunter,” the longest at 6:44 minutes.

An aptly named opening track, simply called “Opening” (1:38), starts Noctilucent and certainly fits into the more ambient area and leads directly into track 2, “Fingerprints” (5:40). “Opening” has a beautiful piano passage with some extraneous background noises which builds up with the keyboards, before a “harsh” drum takes the track out and into “Fingerprints.” This has superb acoustic guitar work, painting a soundscape, which is then superseded by guitar, bass, drums and a very breathy stylized vocal. There is even a beatlesque hint with some of the vocals. The music is excellent, very cinematic in its build-up and these two opening tracks certainly maintain the interest of the listener with some time changes and some intriguing percussion breaks.

“Scared Little Birman” (3:45), “Noctilucent Clouds” (3:56) and “A Lull In The Wind” (3:30) share the more acoustic gentle style of the initial part of track 2 and give a little nod at times  to the sound of early Pink Floyd. This is an excellent trio of similar styled tracks, letting the listener float along on their melodic nature.

The other tracks, “The Court of The Hunter” (6:42), “Paleness” (5:23), “Into the Snow” (5:25), “Colored Mountain Ranges” (4:48) and “The Avalanche Pt 1” (1:11) share the more complex and slightly heavier side of the music. “The Court Of The Hunter,” in particular, sets out a stunning soundscape which “doffs its cap” in the direction of Porcupine Tree, as does “Into the Snow.” ”Colored Mountain Ranges” has some swirling keyboards and a beautifully played guitar melody, while “The Avalanche Pt 1,” which takes the album out, is a very interesting track, even in its brevity and I was left wondering why this track was so short, but perhaps it will be continued at the start of album 2?

All in all, Noctilucent is a very intriguing debut solo release, with some amazing work on show. While the album doesn’t quite get both album stickers, it definitely gets the “One to Buy” sticker. If you wrap your ears around this album for several plays, you will realize that Frank Baker has produced an album that hits very close to a bull’s-eye and we should all be on the alert for the follow up release, when it ultimately appears.

Key Tracks: Opening/Fingerprints: The Court of the Hunter: Noctilucent Clouds