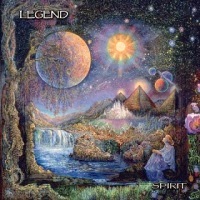 Although the band Legend, who is the subject of this review with their recent release, Spirit, also celebrated their 25th Anniversary last year, the album is only their 5th studio release. Formed back in 1988, they have undergone several changes of personnel together with having a hiatus from 1998 to 2008, thus their output has been low, but always high quality music for discerning audiophiles.

Influences for this band are far ranging and include such acts as Jethro Tull, Curved Air, Clannad, Rush, Jefferson Airplane, Nightwish, Steeleye Span, Marillion etc. The music of Legend is very difficult to put into a neat little box,  it is better to describe it as straddling genres such as neo-prog, prog folk, heavy metal and more, but molded into the sound that is Legend.

The band is currently a 4 piece outfit comprising Steve Paine (keyboards and bass), Paul Thomson (electric and acoustic guitars), Beck Sian (vocals) and Jack Macklin (drums and percussion), with Steve and Paul being original members from 1988.

“Leap Of Faith” (11:53) is one stormer of an opening track with thundering bass and drums. The guitar and the synths are always present behind that stunning vocal work by Beck. The crystal clear vocals are just so powerful, swooping from almost gothic style choral work to the verses flawlessly. The atmosphere of the track can be dark and edgy then move into almost ethereal, gentle areas and back, without the “join” being obvious. As an opening track, this is what I look for, with an almost immediate grabbing of the listener and then enough areas of light and dark to keep them immersed in the music.

“Wood for the Trees” (6:57) simply accepts the baton from track 1 and is off and running from the start. Some stunning guitar work from Paul, perfectly backed up by the synths/keyboards of Steve, underpinned by that tight knit powerhouse of Dave and Steve on drums and bass .With those powerful lungs of Beck effortlessly providing those amazing vocals, this is a gem of a track.

The longest track, “A Tangled Skein” (18:23) starts in a very different manner with some beautifully played guitar, silky keyboards and a clam-like bass, before Becks vocals grab your attention. This moves into an almost operatic style chant section with the vocals soaring, before settling back into the opening passage. Amazing keyboards and guitar around the 4:00 minute mark herald a change to the track, with Becks voice starting to build the track up, and indeed, assuming a style not dissimilar to one Kate Bush. The bass and drums have almost imperceptibly crept more into the mix, and although there is a hint of “metronomic” drumming, it never detracts from the flow of the track. Another track that can be both light and dark when it requires and at times, the keyboards can be persuaded to howl and growl to generate the required atmosphere.

“Crossing of the Ways” (10:10) is a beautiful piece of melodic prog rock with the bass driving the track along and the powerful voice carrying everything along with it. Coming as a real contrast to what has gone before simply adds to the presence of the track. The final track, “State Of Grace” (13:38) features celestial choirs, tubular bells, stunning guitar work, more of that wide range of vocals that Beck is capable of and simply sumptuous synthesized orchestrations.

Spirit is an album that deserves to be “massive” and I cannot recommend this work highly enough. Carrying both stickers, “One to Buy” and “The Experience will last forever” on the cover, my advice is to clear a little space on your CD shelf and treat yourself to a stunningly atmospheric album.

Key Tracks: Leap Of Faith, Wood For The Trees, A Tangled Skein

Tracks:
Leap Of Faith
Wood For The Trees
A Tangled Skein
Crossing Of The Ways
State Of Grace