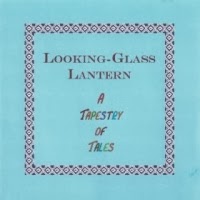 Another debut album up for review by The Ancient One, this time A Tapestry of Tales, by Looking Glass Lantern. This is a majestic album, having already featured extensively on the radio show. Looking Glass Lantern is, in fact, the name under which Graham Dunnington, a classically trained multi-instrumentalist, has conceived and delivered an album that takes the “classic” prog rock style and marries it with the underlying influences of classical music. The outcome of putting those two styles into the “music blender” and pressing “very gentle mix” results in an amazing album, across which majestic music and excellent lyrical content abounds.

Graham was originally a keyboard player in a classically influenced rock band and this led to a small idea starting to grow. Taking some time out, Graham did various things, one of which was to complete a PhD in music, specifically, Victorian Popular music. All of the parts were then put together, superb keyboard skills, Victorian music style, and, the “icing on the cake,” Sherlock Holmes stories. A Tapestry of Tales is an album based around some of the fictional detective’s most famous cases.

Graham plays almost everything on the album, keyboards, guitar, programmed the drum machine (apparently referred to as Al), and sings. The violin is the only instrument that Graham doesn’t lay claim to.

A Tapestry of Tales is a 6 track album which has a total playing time of around 48 minutes, with the longest track, “A Scandal in Bohemia” clocking in at 13:29 minutes and “Wisteria Lodge,” the shortest track at 1:45 minutes.


There are three long tracks and three much shorter tracks making up A Tapestry Of Tales, with the opening track, “The Blue Carbuncle” (12:54), starting proceedings off with a beautifully played solo violin, which then stops to allow a keyboard swathe of sound heralding the track as it progresses through a superb passage, harpsichord et al, onto the vocals just prior to the 3 minute mark. The storyline continues, backed by the music that sweeps majestically along, hitting the heights at times, then dropping gently into line behind the voice. The “classic” prog keyboard sounds within this opening track are mesmerizing and so it comes as a little surprise when it finishes, as almost 13 minutes have come and gone so quickly.

The second of the “epic” tracks is “A Scandal in Bohemia” (13:29) which again envelopes the listener in those stunning keyboard passages, framing another Holmes story. The skills of Graham shine through as the track moves through the range from soft, gentle passages, to the more insistent, driving passages. Harpsichord and church organ sounds sweep through the track and the listener is swept up in the music as it paints another superb aural soundscape.

The third in the “epic” trilogy of tracks, is the title track, “A Tapestry Of Tales” (9:46) and within moments, the deep warm sounds of stunning keyboards, weaving between the vocals, allows the listener to drift into another superbly crafted soundscape. When this, the last track is finishes, the urge is to settle back and listen to the entire album again.
“Six Pearls To Mary” (5:46), “Two Solitary Men” (4:28) and “Wisteria Lodge” (1:45) are certainly no less interesting for being shorter, with the first two mirroring the swathes of keyboard style of the longer tracks, while “Wisteria Lodge” is a gentle wistful acoustic guitar instrumental.

My advice is indeed very simple, buy this album, which has both “One to Buy” and “The Experience will last Forever” stickers on it, and let your mind go on an amazing journey. Further advice would be to start saving for album No 2, again based around Sherlock Holmes, but this time the music is on one major Holmes case. If I had to place a bet, I might be tempted to go for “The Hound of the Baskervilles,” but Graham refuses to be drawn on this. The second album is scheduled for release later this year.

Key Tracks: The Blue Carbuncle, A Scandal In Bohemia, A Tapestry Of Tales