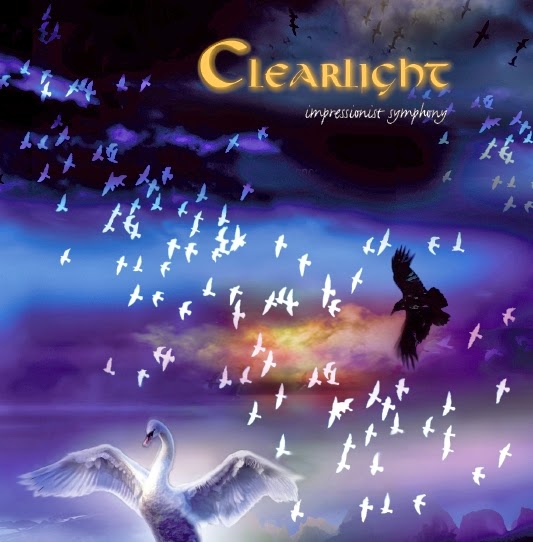 'The Impressionist Symphony' focuses on the artistic style of impressionism, painting and music as well with a Ravel, Satie and Debussy influence merged with Cyrille's progressive music experience and linked with the French impressionist school of painting. Featuring guest appearances by Steve Hillage (GONG), Tim Blake (GONG), Didier Malherbe (GONG), Paul Sears (The Muffins), Don Falcone (Spirits Burning), Linda Cushma (Oxygene8), Chris Kovax (Psyquest) and others, Clearlight's 'The Impressionist Symphony' is clearly one of the most anticipated new releases of 2014!

Cyrille explains, “In 2004, I was giving a solo piano concert at the French Embassy of Brasilia for the June 21st music festival. After the concert, the ambassador came to me and told me I had an 'impressionist style'. His remark gave me the idea to compose a specific Music aimed at the glory of all the impressionists, audio as well as visual.

In 2011, Don Falcone in California made contact with me on Facebook to record some tracks for a Spirits Burning project. So we scheduled an appointment to see what could be done together. First, I recorded keyboard tracks for his project, what became Spirits Burning & Clearlight 'Healthy Music In Large Doses'. When I found out that Don's equipment and technique of collecting tracks from Musicians living all around the World was exactly what was needed to complete my impressionist project, I proposed for him to become a partner in this impressionist saga. He agreed, and began to gather tracks from all of my friends that accepted to play on it, some in England, some in France, others in the U.S. When all of the tracks on his computer's folder were ready, I took a plane to mix it at Don's home studio (CA).

My first album released in 1974, 'Clearlight Symphony', was recorded with the participation of GONG’s Didier Malherbe, Steve Hillage, and Tim Blake. So, for the 40th anniversary, I again asked the trio to participate in this new symphonic impressionist rock project. And they did it! Great friends! I completed the musical crew with Paul Sears (cult drummer of the progressive band The Muffins), Linda Cushma, Chris Kovax, Craig Fry (a very good classical violinist), Vincent Thomas-Penny (another guitarist), and synthesizer player Remy Tran, who helped me record most of the Degas De La Marine piece last summer in his home studio in France.”

“All of which brings us to today: 'The Impressionist Symphony' is now a reality, and it is ready for you to experience.” - Rob Ayling

“When I began to dive deeper into new music, one of my first and longest-lasting discoveries was Cyrille, and the 'Clearlight Symphony' album on Virgin Records. It's been an honor and pleasure to celebrate the spirit of that release, and help shape the sound of Clearlight Impressionist Symphony. My efforts for the new symphony began as gatekeeper of sound, morphed into what Cyrille called the project's 'godfather', and culminated in the role of producer. It's been a fun story, and now it's ready for each and every listener.” - Don Falcone, Clearlight 'The Impressionist Symphony' producer, and captain of Spirits Burning

Clearlight is a French progressive rock band from the 1970s, although their best known work was produced in England, and released by a major British record company, Virgin Records. While progressive rock is an overall genre for Cyrille, much of his work explores various other styles, including classical, psychedelic, symphonic rock, space rock, jazz fusion, and new age music.

“Been a Clearlight fan since the Virgin days. Having worked with Cyrille onstage at the Progday festival 10 years ago, I jumped at the chance to participate in the Clearlight 'The Impressionist Symphony' project when he asked me. It is an honor to be included in the dream team that Cyrille selected for this special recording.” - Paul Sears (The Muffins)

The special package includes a 12-page color booklet that captures Cyrille’s vision, as well as pictures from the sessions that produced these works. 'Impressionist Symphony' continues Cyrille’s return to the world of progressive music and now continues through this release and others on Gonzo Multimedia.

“This music is artistic and genuine; it is such an honor for me to be a part of this eloquent work and look forward to the possibility of one day sharing the stage with these stunning musicians.” - Linda Cushma, Oxygene8

“I bought my first Clearlight Symphony album from a used record store in 1979. I knew nothing about it, and bought it for the cover art. When I got it home and played it, I thought: 'I have found my music'. I dreamed then that I would one day have the privilege of playing with Cyrille Verdeaux, Steve Hillage, and Didier Malherbe. My musical career has gone in a number of directions over the years, but that dream faded, and eventually evaporated altogether. I didn’t even play the violin for ten years. But the forgotten dream found me when Don Falcone asked me if I wanted to play on a new Clearlight album with Cyrille, Steve and Didier. I didn’t take much time to think before answering yes. Violin tracks were recorded at Don’s house, with Don engineering and Cyrille guiding, consulting and editing. In the end the Clearlight 'Impressionist Symphony' has emerged as a beautiful amalgamation of Cyrille’s compositions and the instrumental wizardry of an extraordinary and disparate group of musicians. I am grateful to Don and Cyrille for offering me membership in an extended family I have admired for over three decades, and to which it is an honor to belong.” - Craig Fry, Violin