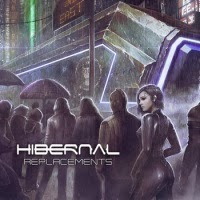 My closing remarks on the review of the debut album by Hibernal, The Machine, released last March (2013) were, “Take a huge bow Mark (Healy) while I gently whisper the question “Where do you go from here?”” That question has now been answered by the release of the follow-up album, Replacements, and Mark has produced an album that sees the ground-breaking scenario of The Machine evolve to a higher level.

Hibernal is the sci-fi post rock project of Mark Healy, from Brisbane, Australia, and he is responsible for all the music, lyrics and mixing, as well as playing guitars, drums and keyboards. Rowan Salt plays bass on the album, and the storyline is given voice by guest narrators, Scott Gentle (Artimus), Faleena Hopkins (Sabel), Steve van Beckum (Roegner) and Chip Wood (Clerk).

The theme of Replacements is that of a man (an ex prisoner) who carries out an empty existence in a near future dystopian city, but becomes infatuated with a female, (a synthetic female), and learns that she is on the run from the law. This would seem to be a little nod in the direction of the Bladerunner genre of cinema.

This is another magical blend of superb instrumental music and storytelling, resulting in a product that straddles the areas of music, film and theatre. The album, Replacements, is a cinematic experience minus the visual aspect. The extremely clever man that Mark Healy is, he has provided the listener with everything, but then allows their imagination to paint the pictures.

Replacements is a 12 track album with a total playing time of around 65 minutes, and track 7, “Machinations” at 3:03 minutes is the shortest track, with “The City Ebbs Away,” track 2, the longest on the album at 7:22 minutes.
As this album, Replacements, tells a continuous story, then choosing tracks to cite as examples of highlights becomes very difficult.  The opening track, “Replacements Part 1” (4:00), sets the scene with Sabel, (Faleena Hopkins), giving a brief insight into this future world. Backed by a gentle synth and bass throb, the vocals seem to fit in perfectly, prior to the themes on the keyboards building up, creating an amazing aural soundscape. Drums add a little bit of drive to the track, and a simple guitar passage soars superbly before the drums fade to allow the track to slip gently into track 2.

“The City Ebbs Away” (7:22), starts with an array of sound effects, then a guitar theme takes the track into subdued bass and drums before the “star,” Artimus, (Scott Gentle), enters with a powerful narrative, painting the visuals for the listener. There are gentle guitar passages, and subtle driving bass and drums, behind the narration, which then ebb and flow, with the gaps in the narration.

The final track, ”Replacements Part 2” (4:21), gives an answer to a question posed back in the opening track, and the initial theme is built up again and forms the perfect finale to what has been an amazing 65 minute journey.
The album is full of amazing solos, deep intense riffing and ground vibrating bass runs interspersed with neat unobtrusive electronic touches and also has some neat twists and turns in the story. Although the album is not a living entity, I am going to make an analogy to the living world and say that the music and the scene setting have a symbiotic relationship with each other. Each aspect helps the other and is in turn helped by the other to form a simply amazing conceptual album.

If you enjoyed The Machine from last year, be prepared to be taken to a much higher level, and if you missed out on the debut , ensure that album No 2, Replacements is high up on your “wish list.” Replacements gets both the “One to Buy” and “The Experience will last Forever” stickers, and must be a contender, even at this early stage in 2014, of being one of the top album releases of the year.

I should also mention that, as well as the standard Replacements disc, there is an instrumental companion disc also available. This will sell for a lower price, but at the moment, will be available free if the standard version of the
album is pre-ordered, before the 24th March release date.

Key Tracks: The City Ebbs Away, The Restless Man, The Place Where You Hide