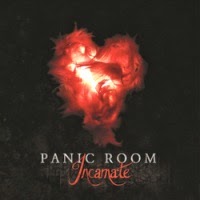 Incarnate is the 4th album from the Welsh Band, Panic Room, since their formation back in 2007. The band was formed by former members of the band Karnataka and released the debut album, Visionary Position in 2008, followed at regular intervals by Satellite (2010), Skin (2012) and now Incarnate (2014).

The best description of the music of Panic Room is probably under the umbrella of crossover prog or a female fronted progressively influenced band in the vein of Magenta and The Reasoning.

Incarnate is a 10 track album, clocking in at around the 61 minute mark with the penultimate track, “Close The Door,” the shortest on offer at 5:10 minutes and track 6, “Into Temptation” being the longest, running on to just under 8 minutes (7:55).

The opening track, “Velocity” (5:17) has a memorable spiraling guitar riff by the “new boy” Adam, leading into Anne Marie’s remarkable vocals while being ably supported by the power unit of the band. The keyboards are in there as well, but remain a step back, neatly behind the voice. All in all, this is a terrific starter to the new album with an instantly accessible “hook” that quickly embeds in your mind.

The next few tracks, “Start The Sound” (5:12), “Incarnate” (7:37), “Nothing New” (6:17) and “Waterfall” (5:30) have a distinctly different sound with a more “stripped back” approach, giving a little nod in the direction of the more acoustic styled side project, Luna Rossa. They are much more keyboard/vocal led which also, because of the “space” available in the sound, allows the band members to take the spotlight from time to time. The vocals are at times, emotive, powerful and also, slightly brittle, fitting the tracks like a glove.

“Into Temptation” (7:55) is an amazingly atmospheric track with Adam getting in a few tasty runs early in the proceedings and Anne Marie employing “breathy” vocals initially. The track gently moves into the “slow burner” territory with some unobtrusive keyboards supplementing the voice. The drums and bass keep the track motoring along with a little subdued urgency and within this track there is a terrifically catchy chorus. Just prior to the 5 minute mark, there is a sublime passage, keyboard led, which is almost spine-chilling and Adam’s guitar then edges into the picture before Anne Marie resurfaces with another chorus. This would certainly be my choice of track for the “instant” track on the album, and it certainly seems to end long before its 7:55 minutes has passed.

A real jazzy track “All That We Are” (5:40) follows, and although musically it is faultless, I felt that it was just too much of a contrast, but things return to “normal” with “Searching” (5:52) and “Close The Door” (5:10), both very different tracks, but distinctly Panic Room.

The finale to the album Incarnate, “Dust” (7:15), is another very atmospheric chunk of music with a long slow introduction and those “breathy” vocals by Anne Marie. The overall feeling is of a dark, brooding piece of music that flows back and forth, constantly shifting with instruments taking the lead and then stepping back again. The repeated passages seem to echo in your mind even after the track has ceased. This is a very powerful track, constantly simmering but being kept strictly in check. “Dust” is a superb final track to a thoroughly enjoyable album.

Incarnate is a superbly constructed album with a variety of soundscapes generated by a tightly knit group of musicians with one aim in their sights and that is to produce music of the highest quality. Another 2014 release to get both stickers “One to Buy” and “The Experience will last Forever,” and I don’t think that there was any doubt of that from the very first play. The advice is to get out there, hunt down a copy, settle into a comfortable seat and listen to some simply stunning music.

Tracks:
Velocity
Start The Sound
Incarnate
Nothing New
Waterfall
Into Temptation
All That We Are
Searching
Close The Door
Dust

Sell your beats online at ReverbNation.com
By Keith "MuzikMan" Hannaleck at March 25, 2014