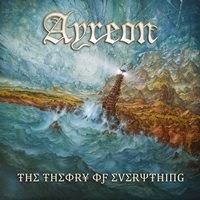 When prog rock fans listen to music they expect a great storyline, complex music, and atmospheres that encourage that story. One artist that has had a proclivity for doing that his entire career is Arjen Anthony Lucassen, otherwise known as Ayreon.

When The Theory of Everything came out last fall there was a lot of anticipation that his masterful concepts would continue along with all the incredible guest musicians. He did not disappoint, he never does.
A dream came true for Arjen on this musical sojourn. Three major players joined in on all the proceedings, each one a legendary keyboard player. Rick Wakeman, Keith Emerson and Jordan Rudess made their contributions count on the session. Another legend, John Wetton, provided vocals as the character The Psychiatrist.

I found myself all wrapped up in this story while listening. In short it’s about a boy and his mother that are not getting enough attention from the scientist father who is working day and night trying to literally figure out The Theory of Everything. Further into the story, the father finally tells the son that he had been giving him a drug, using him as an experiment in hopes that it would help the boy overcome his problems. There is much more to it all and that is a short encapsulation of what you will hear. The music is right on time and spot on for every track and it always puts more emphasis and thought upon the entire process of listening for the music fans. Anyone that is familiar with Arjen’s music knows of his fascination with the unknown, science fiction and what confounds man and all the mysteries of the cosmos. That is his driving force along with a never ending desire to create music in his studio.

Arjen puts it all into proper perspective in his own words: "The story on this album looks at what happens when people are driven by an irresistible passion, like me in music. In this case, it's a scientist who is obsessed with finding the theory of everything -- the equation that will explain and tie together all known physical phenomena. He's so focused on solving the theory that he risks losing everything, including his family.  But he is not alone -- all of the characters are driven to fill some kind of emotional need no matter what the consequences. If I had to sum it up in one sentence, I would say that the story deals with the drive to succeed and the emotional costs that come with treading the fine line between genius and madness."

One element I particularly enjoyed besides all of the heavy prog metal guitars, bass and swirling keyboards was Troy Donockley’s Uileaan Pipes. That one addition gave the music an air of distinction that separated it from all other prog projects that came out last year. CD 1 has 22 tracks and CD 2 has 20 so it a very generous collection. Arjen told me that it would take some time to sit and listen and be able to assimilate the entire package. He was right however it was a joy to do so.

Arjen continues to outdo the last project and he never seems to run out of steam. He is always inspired and has a lot of respect in the prog community. One look at the guest list would make that obvious. I know he is a very humble man and does not consider himself to be a legendary performer like the people that contribute to his projects but he has earned a place amongst the elite in prog rock. The Theory of Everything is one more addition to his ever growing popularity and impressive legacy.

One bonus I always look forward to is the DVD and all footage of Arjen and his guests during the creative process in the studio. I would feel incomplete without it. Not only is he one of the hardest working musicians on the planet, he makes it a point to communicate with all of his fans. That is so important especially now in our digital age. This man is as real as it gets folks and his music is something to be appreciated by all music fans.

This album showcases masterful musicianship, incredible vocals from talented men and women and a story that is thought provoking and exciting every step of the way. If you need an escape valve for a few hours and one that is not cookie cutter radio spew, then this can be your one way ticket to another world. Arjen has the magic and he uses it to the fullest extent. This is without a doubt a prog lover’s happy place.