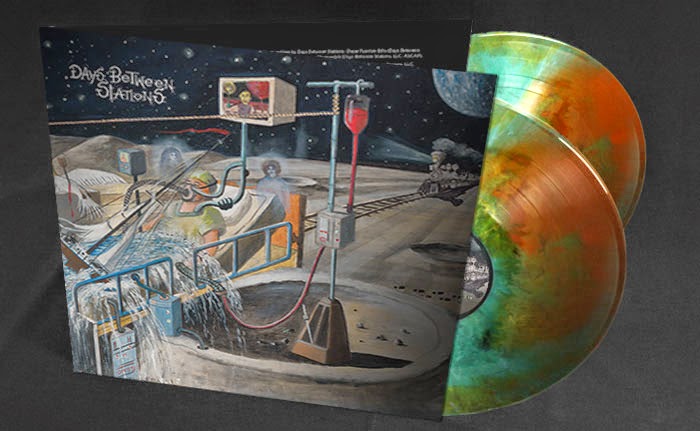 Los Angeles, CA - Much to the excitement of vinyl enthusiasts around the globe, prog duo Days Between Stations have released their critically acclaimed new album 'In Extremis' on a limited edition DBL LP!

Says guitarist Sepand Samzadeh, “We put a great deal of emphasis on creating a mood by way of sonic textures. The CD was mastered so that the listener could CRANK THE VOLUME ON THE STEREO. If you really want to hear THE COMPLEXITY OF ALL THE LAYERS AND SONIC TEXTURES, the vinyl record is the way to go.”

Founded in 2003 by guitarist Sepand Samzadeh and keyboardist Oscar Fuentes, the duo named themselves after the cult novel by Steve Erickson and have devoted themselves to, as they say, Art Rock and Post Prog - music that reflects their varied influences, as well as shared disregard for stylistic boundaries. This eclecticism continues apace on 'In Extremis'. At times the music recalls Peter Gabriel or 'Duke'-era Genesis (as on the propulsive “Visionary”, which features Sherwood's multi-layered vocals and Levin's driving Stick bass work), or an ambient marriage between Pink Floyd and Lisa Gerrard and Debussy (“In Utero”), or even a cross between Ultravox and Marillion and 'Abacab'-era Genesis (the Moulding-sung “The Man Who Dies Two Times”).

Here's what the press has raved about 'In Extremis':

“The fact that Rick Wakeman, Tony Levin and Peter Banks help create this majestic piece of symphonic prog only made this a stronger contender for prog album of the year.” - Mark Johnson, Sea of Tranquility

“Indeed, Days Between Stations nestles an artsy approach into its repertoire, often contrasting the soloists' tenacious yet purposeful excursions, and seeded by the leaders' wide-ranging agenda.” - Glenn Astarita, All About Jazz

“But the late Yes founder (Peter Banks) is just the beginning of the dark-hued wonders to be found on this neo-prog triumph. Accessing an endlessly fascinating palette that also takes in ambient and classically inspired moments, Oscar Fuentes and Sepand Samzadeh brilliantly explore themes of life, and death, and everything in between.” - Nick Deriso, Something Else Reviews

“Here's an album that deserves a place in everyone's record collection. The superb artwork and quality of the booklet and packaging makes it a must-buy as opposed to (legal) download, for me at least. Support truly great musicians going out on a limb to bring you truly great, original progressive rock music as good as some of the classics.” - Brian Watson, DPRP

“Days Between Stations have really matured into a first class symphonic prog band with the music created on In Extremis. There are so many wonderful moments where the music takes flight and goes in completely unexpected directions. And that’s one of the things we’ve come to love about prog. In Extremis fulfills all musical expectations in that sense.” - Jerry Lucky