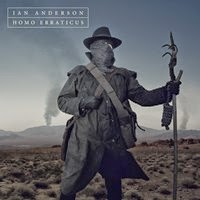 Ian Anderson is back at it again with a follow up to the surprising sequel to Thick As  A Brick, the strong TAAB2. That stout showing with a different band gave Mr. Anderson as much authority as one would expect being the driving force behind Jethro Tull since their inception. So what does the prog legend do for an encore now? Under the banner of Ian Anderson, which equates to Jethro Tull to most of us longtime listeners, we now have the persnickety Gerald Bostock taking another journey on Homo Erraticus. Note that it is not referred to as Homo sapiens but our species gone a bit astray or erratic.

Anderson and band are back in fine and witty form on this release. He colorfully describes the gist of the story on their website and it gives the perspective audience a window into what is going to happen upon listening to the new progressive rock journey. In summary…The now middle-aged Gerald Bostock after a trip to Mathew Bunter’s Old Library Bookshop in Linwell village, the two gents came across a dusty, unpublished manuscript, written by local amateur historian Ernest T. Parritt, (1873 -1928), which is entitled “Homo Britanicus Erraticus.” Then from there the album jumps into three suites as the story moves along. Part One: Chronicles is comprised of tracks 1-8, Part Two: Prophecies tracks 9-11 and then rounded out with Part Three: Revelations with tracks 12-15.

Anderson continues to burn the midnight oil while opting to explore new avenues and challenges rather than resting on the laurels of previous accomplishments. His voice is the perfect complement to the most entertaining music found on this new album. The pace of each track is ever changing and the scope is broad with artistic strokes of progressive rock, metal and folk to create the backdrop to the story, all with energetic purpose. I think Ian has adjusted well to losing some range in his vocals over the years and the music more than compensates for that change. He is a storyteller supreme and the music is the proverbial icing on the cake.

”Doggerland” leads things off nicely and sets the tone for a proper Jethro Tull/Ian Anderson outing and from that point it gets “progressively” more interesting whilst moving into each suite. As usual Ian’s flute adds an entirely different dimension to the music and it just would not be the same without it of course. The different moods and atmospheres are placed properly throughout and the story masterfully told by the master himself. “The Turnpike Inn” is likely to remind you of the heavier JT with the guitar playing, it still works very well. As much as I respect Martin Barre and have enjoyed his work over the years I cannot see where he is missed, particularly on this rocker. Ophale does more than an adequate job and most certainly Ian would take no less than the best musicians to work with to perform his compositions. “The Engineer” picks it up again with some strong guitar lines and Ian’s voice is very capable here. “Tripudium Ad Bellum” keeps the fires burning with rapid flute lines to kick off the proceedings then the intro takes a turn with some nice jazzy guitar as Ian has some fun leading the way with his flute. Suddenly it changes again with some driving passages like TAAB had to offer. It is an instrumental foray that introduces you to the second suite in a most classic prog way. “The Browning Of The Green” rounds out the final suite. It is a drive you home number with great music from all points. The combinations of instruments and unique vocals created in this recording take the best of what Anderson and band has to offer. The rock, folk and metal combined is what you would expect and that is exactly what you get on this entertaining excursion. “Cold Dead Reckoning” ends the opus most appropriately with the classic JT sound and flair. The title has finality to it and the music lures you in and hits hard leaving you to think what could possibly come next but alas this story is over. In the end what you get is an all-encompassing state of man set to music that surely has another chapter to tell down the line. I don’t think we have heard the last of Gerald Bostock…that is if man made it out of the desolate land he walked upon as the curtain closes one more time.


I must admit upon first listen I was not too sure about this album but after several more subsequent spins it grew on me a few notches upon the ladder of approval. This is not music you can listen to in the background; it demands your complete attention to be appreciated as an entire work of art. It’s never cut and dried with Mr. Anderson and you will find once you consume every bite of this full course meal that Homo Erraticus is yet another triumph. This is indeed a musical story that deserves repeated listens. Is this another prog rock classic? I have no doubt that it is. You must add the album to your collection if you have a place in your heart and soul for progressive music.

Key Tracks: Doggerland, The Turnpike Inn, The Browning Of The Green