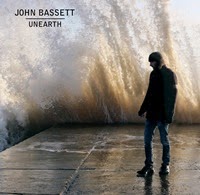 John Bassett is not a name that is uppermost in many people’s minds in progressive music circles, unless you are aware of his involvement in KingBathmat, a progressive band with 7 albums under their belt, but I believe all of that is about to change with the release of Unearth, his debut solo album.

John is a multi-instrumentalist, singer songwriter and producer and is, as already mentioned, predominantly known for writing the music and producing the albums for his band, KingBathmat, since 2003.

Unearth is essentially an acoustic album and seems to have garnered a variety of comments about how best to describe the music, but the press release suggests that the album is a combination of progressive rock and psychedelic folk. It certainly is not overtly progressive if you view the genre as containing complex time signatures and the omnipresence of the mighty moog/mellotron, but the music does show unusual song structures, meter changes and deep, meaningful, powerful lyrics.

The album, Unearth, is certainly a solo album in almost every sense of the word, with John providing vocals, guitar, bass, keyboards and theramin, as well as sharing the drum stool with Nathan A Summers. Indeed, not content with that, John also recorded, produced, mixed and mastered the album.

Unearth is a 10 track album with a total playing time of around 45 minutes and the shortest track on show is the final track, “The Comedian,” clocking in at 3:31 minutes with the penultimate track, “Something That’s More Worthwhile” the longest on the album at 7:43 minutes.

The opening track to any album has a tremendous weight on its shoulders as it is responsible for the immediate gut reaction to the album. “Stay Away From The Dark” (4:08), which also has a stunning video to check out, is a superb introduction to the album, with an echoing piano and  a guitar that sounds double tracked. The lyrics, which are intense and hard hitting throughout, tell the story of a decision that requires to be made while the beautifully played acoustic guitar parts accentuate the melancholic nature that the music aurally paints. With lines such as “with your certificate, you’re qualified to shovel dirt” and “now don’t lose your spark, stay away from the dark,” the horns of a dilemma scenario is set out.

“Survival Rate” (4:47), “Nothing Sacred” (3:35) and the title track, “Unearth” (3:42) continue onward through this superbly intense musical journey. “Survival Rate” has little encounters with mellotron, keyboards and theramin, while “Nothing Sacred” is a more upbeat track with a stunning bass line and Hammond organ and “Unearth” has a rich sound, with superb acoustic guitars and the haunting line “you dig up the past and make things worse, and then you will see what you unearth.”

Another “soft” track in the form of “Pantomime” (5:42) follows with a sparse keyboard against acoustic guitars, drum and bass before there is a gentle, almost unobtrusive synth passage which seems to ebb and flow. This leads on to “Kylerhea” (4:41), an instrumental which has an insistent drumbeat with the acoustic guitar replacing John’s voice and also one of the most abrupt endings to a song I have heard. Everything fades to leave the insistent drum again, but it seems to stop before you expect it to.

“TV is God” (3:44) and “Keep Dear” (4:04) are very different tracks with the former showing drums, bass and a slightly discordant guitar which then sweeps into guitar passages interwoven with more subdued keyboards. “Keep Dear” sets up an almost countryside scenario with birdsong leading into some more superb acoustic guitar work. You become aware that there are two guitar parts and more unobtrusive keyboards as the song flows and returns to let the birdsong take the track out.

The penultimate track, “Something That’s More Worthwhile” (7:43) is an extended example of the music that has gone before. The keyboards simmer away behind that very pleasing acoustic guitar and the song moves along with some double tracking (?) of the vocals which get very close to becoming dissonant, but manage to neatly sidestep the trap. The sound builds with the electric guitar pushing the track along and there seem to be several cyclical guitar passages, each trying to reach the spotlight as the track ends.

The final track, “Comedian” (3:31) commences with another soundscape, this time using an alarm clock, singing birds and just the hint of a city wakening up. Subdued piano behind the voice and acoustic guitar set the scene for a relatively short track to bring the album to a close, returning to the bird song merging again into the alarm clock/bell.

Unearth is a gem of an album and seems to get it right on many different levels. The music is mesmerizing, melancholic, rich and flows effortlessly along, drawing the listener in; the voice has a characteristic uniqueness to it, in the way that Roger Chapman (Family), Peter Hammill (Van der Graaf Generator) and Mike Kershaw voices possess, and the lyrics are deep thoughtful and incisive. Subtle hooks, little riffs, passages, lines of lyrics, all quickly embed themselves in the mind after only one play, then get stronger with every consecutive listen.

Both the stickers, “One to Buy” and “The Experience will last Forever” are emblazoned on this album and no-one should miss out on this release, so clear a space on your CD shelf/rack for John Bassett. This is yet another contender when the albums of the year start getting talked about.

Key Tracks: Stay Away From the Dark, Unearth, Something That’s More Worthwhile