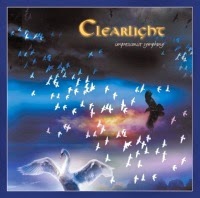 When this particular release for review, Impressionist Symphony by Clearlight, landed on my desk, there was a little light that went on somewhere deep in the recesses of The Ancient One’s mind. Slowly the dimmer switch kicked in and the spotlight slowed and stopped on Clearlight Symphony by Cyrille Verdeaux as an album I had possessed somewhere in the mists of time. Reading a little more info, it was indeed the same band and this new release, Impressionist Symphony, celebrates the 40th anniversary of Clearlight Symphony. With the penny having well and truly dropped, I was very interested to see what changes, if any, had occurred in the interim.

The reasoning behind Impressionist Symphony is to take the influence of some classical composers, such as Ravel, Debussy and Satie, the ethos behind the French impressionist painters and the progressive musical background of Cyrille Verdeaux and see where it led.

Impressionist Symphony is an 8 track album with a total playing time of around 64 minutes. The shortest track on offer is track 7, “Lautrec Too Loose” with a playing time of 5:28 minutes, and the longest track is “Gauguin’s Dans L’Autre” with a running time of just over 11 minutes (11:07). There also seems to be a bit of a play on words in the titles as well.

The opening track, “Renoir En Couleur” (8:03) is a simply cracking track, starting with a fairly meandering introduction, with lots of synths, some guitars and then a superb violin cutting across everything. Slowly building, the drums drive the track along until there is a crescendo around the 2:50 minute mark when the sound drops away leaving a tinkling piano, sweeping synths and the gentle sound of the wind instruments painting a beautiful aural soundscape. 4:30 minutes sees that excellent violin joined by a superb guitar, eliciting smooth riffs then more jagged riffs until the tracks gains a more majestic passage with some amazing synth sweeps. From around the 7:00 minute point, the track is beginning to make its exit with some free-form bits and a little guitar flourish whispers “bye bye.”

Following this track, “Time Is Monet” (9:43), kicks off with some superb violin, wind instruments, piano and sweeping synths, “Pissarro King” (6:27) has a more spacey style introduction, still with the synths and piano, but also a cutting guitar passage for this more up-tempo track, “Degas De La Marine” (7:53) continues this spacey feel with the recognizable classical theme deep in the mix and a much more dramatic feel to the sound and then “Van Gogh’s Third Ear” (6:39) builds almost from the start of the track with some very classically sounding piano then guitar and, not forgetting, the synths, before merging into a driving track with the instruments bowling along and ultimately almost tripping over each other to escort the track out.

“Gauguin Dans L’Autre” (11:07) is the longest piece on display and enters with some beautiful wind instruments setting the scene with excellent piano accompaniment. Pictures of gentle winds moving leaves and birds soaring are conjured up in your mind. Synths generate the “wind” sounds before the piano and the synths raise the volume of the track when it then just as quickly moves back to the gentle breeze interlude again. As the track approaches the 6 minute mark, the song becomes very classically styled with little interjections from synths, and to a lesser extent, the guitar. An almost storm-like scenario is built up with the “wind” threatening before the violin superbly brings the epic rack to a wondrous close.

The penultimate track, “Lautrec Too Loose” (5:21) seems to remain overshadowed by the brilliance of the previous track, and although very pleasant, fails to show any of the more memorable moments that seem prevalent in other tracks.

Winding up Impressionist Symphony is “Monet Time Duet” (9:22), which is another very classically tinged piece of music. Slow, but never ponderous, it glides along gently on the wings of piano and violin, carrying the listener along with it. Never varying in tempo much, this track ebbs and flows beautifully and certainly seems to end long before its stated 9+ minutes (9:22).

Having heard nothing from this band since Clearlight Symphony back in 1974, Impressionist Symphony is a very impressive album. There are certainly no new groundbreaking moves angling off in different directions, instead what we have is solid classics/prog collaboration. This will probably requires several listens, but well worth the time invested in this album, and just falls short of gaining the all-important “One to Buy” sticker.