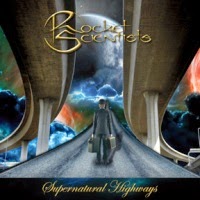 Landing on my desk for review recently, was Supernatural Highways, by the band, Rocket Scientists, yet another of those bands that might have been lost “under my music radar.” In existence since the late 80’s, the band has previously released four studio albums, Earthbound (93), Brutal Architecture (95), Oblivion Days (99) and Revolution Road (06), a live album (97) and a box set of the initial three releases plus a bonus disc with new/cover material (08). This latest release, Supernatural Highways, is a mini album with one new track and one cover track.

Supernatural Highways is a two track mini album with a total playing time of around 30 minutes. The main track, “Traveler on the Supernatural Highway,” is an epic 26:09 minutes in length, while the cover of “ On Her Majesty’s Secret Service” is a much shorter 4:14 minutes long.

The main track on this mini album, “Traveler on the Supernatural Highway” (26:09) is an epic in every sense, as it is extraordinarily long, has simply superb musician skills highlighted, travels though many styles, and demands the listeners’ attention at all times. In truth, this is an instrumental that “grabs your ears” and refuses to let go for just over 26 minutes. There is an atmospheric start to the track, setting the scene, almost like a rocket engine idling, just waiting to kick in and let rip. There are some simple guitar/synth passages until the synths start in earnest around the 1:15 minute mark and then gently builds. Thoughts of Vangelis and Tangerine Dream drifted through my mind as the keyboards of Erik Norlander take off and carry you away. Drums and bass (stick) support the superb keyboards as the track takes off with those recurring keyboard passages constantly driving deep into the recesses of your mind. The ever shifting rhythms maintain the interest as passages flow effortlessly into place. The constant ebb and flow of the sound, highlights different aspects of the music with some exquisite cello passages present. Around the 10 minute mark, the sound drops to allow the cello a short “solo”, joined by some superb percussion, stick and piano/synth take the action onwards and upwards again. Just prior to 12 minutes, the tempo changes with a simple piano passage which continues to build in intensity with again, support from excellent drumming and stick playing. A more ethereal synth passage appears before the drums and stick get a little flourish in the spotlight leading to an interesting little synth duet. Thus far in the track, the guitar of Mark has been very subdued, but around the 16 minute mark, in a duel with very retro synth/keyboards, it is let loose for a short spell, before the track takes on a very “latinesque” feel. 20 minutes in, and the awesome keyboards are again driving the track along, prior to the long wind-down to the finale. Swirling synths and a return to the acoustic guitar theme from the start, escort the track into the last few seconds of its 26 minutes, when the “rocket engine,” heard at the start, throttles back and shuts down.

The cover of “On Her Majesty’s Secret Service” (4:14) is a fairly straightforward version of the “Bond” song, but touches of superb guitar, magnificent brass work and some interesting synth passages, contribute to a satisfying, if relatively short, second track.

After a hiatus of around 6/7 years, the Rocket Scientists are back with a suitably supercharged mini album, Supernatural Highways, which certainly wants you to delve into their back catalogue, (assuming you haven’t heard of them), and also whets the appetite for some full length releases in the future. Powerful synthesizer based progressive rock, at times shifting from retro to futuristic modes, which certainly gets the “One to Buy” sticker and possibly the only reason that the second sticker doesn’t appear, is that there is a feeling of relative disappointment with the cover track after that masterful epic opening track.