Concert Review: Rick Wakeman-40th Anniversary Tour Journey to the Centre Of The Earth


Rick Wakeman-40th Anniversary Tour Journey to the Centre Of The Earth
May 6, 2014
Glasgow Auditorium
Website: www.rwcc.com 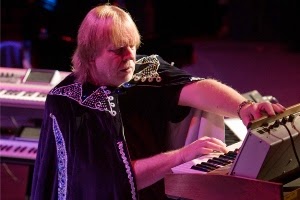 Rick “The Caped Crusader” Wakeman is surely one of rocks lucky gentlemen. Lucky, in that he has survived a couple of heart attacks in his 20’s and a gentleman, well because he conducts himself as a gentleman should. Having been a fan of The Caped Crusader since the release of The Six Wives of Henry VIII, the present of a VIP ticket to see Journey to The Centre of The Earth being performed 40 years after the album was released and toured with, made a special birthday, even more special.

The run-up to these concerts began when a “lost” 18 minutes of the original Journey were rediscovered. Initially the record company, back in 1974, would not agree to release a double album and so some music required to be removed to allow the remainder to fit on 2 sides of vinyl. At the time, the “going” rate on a side of vinyl was around 20 minutes. This removed section was, assumedly, stored away in a “safe” place and then was lost. A revamped, extended version of Journey was issued in 2012 and indeed featured, in its entirety, on the 2012 Christmas Eve show of The Ancient One.

Fast forward a year or so and the announcement was made that Journey was to be dusted down and taken out on a 40th Anniversary tour. This was news that would shake the very foundations of progressive rock and indeed it was true, and dates started to appear for April-May 2014.

On the road, Journey was a huge undertaking with Rick Wakeman, Ashley Holt (vocals), Hayley Sanderson (vocals), David Colquhoun (guitar), Matt Pegg (bass), Tony Fernandez (drums), Guy Protheroe (conductor), Philip Franks (narrator), The Orion Symphony Orchestra and The Glasgow Singers (replacing The English Chamber Choir for this, the Glasgow date). All of those participating would be worked very hard for the duration of the 14 dates.

Arriving shortly before 4pm at the Clyde Auditorium, Glasgow, the select few with VIP tickets were given a glossy laminated pass and led into the main hall to attend the sound check/rehearsal, which although scheduled for an hour, stretched to 90 minutes. Watching various sections of the musicians playing and then repeating chunks of Journey and the “new” choir being put through their paces, was a revelation into how frustrating getting it just right, can be. The sound check over, the three original intrepid travelers from the Journey back in 1974, Rick, Ashley Holt and Tony Fernandez  held a short meet and greet with people before disappearing off to ready themselves for the 8 pm start.

The main event was split into two sections, the first was Rick plus a keyboard and the chance for him to flex his storyteller muscles and the second, Journey itself. Having already seen Rick do his storytelling act several times over the years, I was not concerned I might already have heard the stories as over 40 years in the business certainly provides masses of tales that could be told. He concentrated specifically on people who had been instrumental in pushing him to “follow his dream” and not be put off by negative comments. Starting with Cat Stevens, as Rick had played those amazing piano passages on “Morning Has Broken,” the Glasgow Singers provided a superb vocal accompaniment, and then Rick introduced his female vocalist, Hayley, who sang “Life on Mars,” in a nod of thanks to David Bowie for also telling him to do what he believed in. Next up was Ashley Holt and the pair reminisced about the “early days” and then traded stories relating to the first World Tour of Journey, before presenting a bluesy rendition of that old classic, “Summertime.” To conclude the first part, Rick mentioned two more people, his father and Sergei Prokofiev. His late father, also a musician, gave him very solid advice, but also when Rick was young, took him along to Prokofiev’s Peter and the Wolf and this was the point that the young pianist realized that you could tell amazing stories through the medium of music and led, somewhat later, to Jules Verne’s Journey To The Centre of the Earth becoming a musical reality.

The first section completed, there was a short interval prior to the main event of the evening. Resplendent in one of his characteristic glittery capes, Rick stood amidst an array of keyboards, (I was not sure if there were 11 or 12 assorted synths/keyboards), there was an immaculately dressed orchestra, a similarly impressively dressed choir, a variety of band members, Guy the conductor, and seated, almost throne-like, center back, was Philip the narrator. There was a tapping of Guy’s baton, a brief silence, and then the Journey started.

To pick out high spots in the performance would be a thankless task, as this was a majestic hours’ worth of stunning performances by everyone involved. From the point that the requested silence was broken by the voice of Philip, the narrator, the musicians on stage served up an almost flawless performance of Jules Verne’s Journey To The Center of the Earth. From the opening narration of “The Preface,” the Journey merges into “The Journey Overture” with the orchestra and choir in full flow and the first sounds of synthesizers from Rick put in an appearance. From that point on, the audience was transfixed as the story moved through the adventures of the explorers. Crystal clear confident narration throughout, note perfect orchestral passages (together with beaming smiles from the musicians), beautiful ethereal sounds from the choir and the tight knit set of musicians forming the Rick Wakeman Band, all played their part in the spectacle. Rick himself, merely confirmed that he is a true master of all manner of keyboards as he moved from one to another seamlessly.

Both vocalists, Ashley and Hayley, performed superbly, but I did detect a little bit of wavering on occasion, probably down to the demanding schedule of the shows.

As one, the audience rose to applaud the spectacular performance at its completion, and the encore, which Rick joked “could last another hour and a half,” encompassed material from the sequel album, Return to The Centre of The Earth. This led on to a fast, furious and frenetic return to “Hall Of The Mountain King” and “Mount Etna” before the crowd was again back on its feet.

It may have been 40 years since this particular show had been presented live, but to those present in the Auditorium that night, it was indeed worth the wait. Everyone knew that they had witnessed a majestic keyboard wizard in his element, backed by superb musicians and singers. The sights and sounds of that night would live in the minds of the audience for a very long time.

I wonder when Rick might decide to do The Myths and Legends of King Arthur and The Knights Of The Round Table?  Perhaps we will have to wait until the technology exists to allow the title to fit onto a t-shirt.