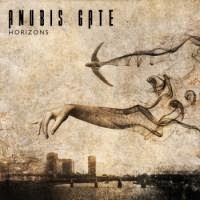 Anubis Gate markets themselves as “Denmark’s premier prog/powermetal band” and it is hard to argue with this statement after listening to their newest release, Horizons.  I would also say that they would be considered a premier band no matter which country they call home, in fact.  Following the success of 2011’s self-titled album, Horizons is not just a step in the right direction from Anubis Gate after their previous album, but it is also a step up, because this might just be their best work yet.

Even more impressive is that they have managed to stay so consistent quality wise, following the departure of two of their founding members. Guitarist Jesper M. Jensen left in 2012 and drummer Morten Sørensen departed a few months later.  Anubis Gate’s current line-up stands as Kim Olesen (guitar, keyboards), Henrik Fevre (bass, lead vocals), Michael Bodin (guitar), and Morten Gade Sørensen (drums).  Their chemistry must be very strong, as they have crafted a true progressive metal masterpiece with Horizons.

“Destined to Remember” is the first of ten incredible tracks.  It is a fantastic opener that is a complete rush, showing that these guys are still in top form.  The music is grand and explosive and the vocals sound clear and powerful.  It is evident that they have not been placated by the success of their previous album.  “Never Like This (A Dream)” comes out hard and unrelenting before switching to a more melodic sound.  It is one all-around rocking sound with a catchy chorus that has been stuck in my head for days.

For all those out there looking for the perfect song to head bang to, “Hear My Call” is exactly what you need.  The intro is devilishly good and thrashing.  Then the guitars and vocals kick in for a melodic song that absolutely soars.  I can see this one being an album favorite for many.  Offering a refreshing change of pace is “Airwaves” with its toned down acoustic opening.  This song offers a nice mix of melodic rock with the progressive sound.  “Revolution Come Undone” is a monster of musical creation that thrashes pretty hard.  It is chest-thumping, get-your-blood-pumping type of song, making it an excellent song to mosh to.

At the album’s halfway point, “Breach of Faith” lures you in with the opening keyboards and then switches to some hypnotic drums and guitar, before bringing it all together for an ecstatic release of music. The heavy and brooding “Mindlessness” follows it up.  It has an excellent groove with some great riffs.  The dazzling music of “Horizons” is a picture of melodic progressive metal perfection.  “A Dream Within a Dream” is a 14-minute epic that never becomes tiresome.  It is a wondrous song with many surprises.  It is dark and ambient, while being very melodic and, at times, quite catchy. In the end, “A Dream Within a Dream” is the perfect example of Anubis Gate blending their diverse sound influences.

Anubis Gate’s Horizons is a triumphant album.  This is the type of music that needs to be absorbed through multiple listens, as it will get better each time.  It is a little early to call it, but I think that it is safe to say that Horizons is a contender for best progressive metal album of the year.  Fans should love this album, and, if you are new to Anubis Gate, then this is a good as any place to start.  It will not disappoint.

Tracks:
01.Destined to Remember
02.Never Like This (A Dream)
03.Hear My Call
04.Airwaves
05.Revolution Come Undone
06.Breach of Faith
07.Mindlessness
08.Horizons
09.A Dream Within a Dream
10.Erasure