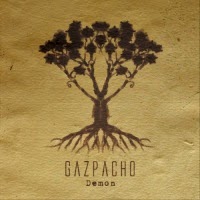 This was an interesting album to receive for review as I had been listening to it, and playing tracks on the radio show for a few weeks beforehand. Gazpacho, a progressive art rock band from Norway, has just released Demon, which is the 8th studio album to have been released since their debut album, Bravo, issued back in 2003. Regular readers of my review will have probably picked up on the fact that I am not comfortable with the constant need to squeeze a band into a particular labelled box, such as neo-prog (?) etc, but one critic described Gazpacho in a way that I find just a little bit over the top. The band were said to be “classical, post ambient, nocturnal, atmospheric, neo-progressive, folk, world rock, which should explain why I prefer to simply call it all, progressive rock.

The band initially released their material via the internet which allowed them to maintain full time jobs, but also release an album every year, over which they had complete control. With a growing fan base and an excellent output, Gazpacho signed to Kscope in 2010 and all subsequent releases appear on this label.

Demon is basically a 4 song album based on, what the band refer to as, “the mad ramblings left behind by an unknown tenant in an apartment in Prague.” The discovered manuscript seemed to form a sort of diary in which the author claimed to have discovered the source of an “evil presence” in the world. Some of the entries seem to indicate this unknown author had lived through the ages searching out this “presence.” The band felt that this seemed a terrific idea to use as the basis for a concept album, and ultimately it has taken two years to complete.

Although described as a 4 “song” album, there are, in effect 8 tracks, as some tracks have multiple parts. Demon has a total running time of around 45 minutes with the shortest track on offer, “The Wizard of Altai Mountain” clocking in at 4:52 minutes and the 3 parts of the final track, “Death Room,” the longest, with a playing time of 18:44 minutes.

Gazpacho is a band filled with musicians  that are masters of the art form referred to as “less is more,” in that they do not feel the need to overlay masses of instruments on tracks, nor do they try to play several hundred notes every second. The brilliance of this band is that at times they strip everything back to the bare minimum, but still provide a fantastic aural tapestry that the listener becomes inextricably woven into from start to finish.

The opening sequence, “I’ve Been Walking Pt 1 a+b” (9:46) is a superb example of stripped back, but deeply intense musicianship. The plaintive voice of Jan-Henrik together with a solitary piano starts this track, with “dark” strings building behind the voice. A short wall of sound accentuates that plaintive vocal before the track merges into acoustic guitar and strings, before dropping further into the stripped back mode, with the voice backed by gentle sounds. A slow building of sound behind carries the track into the second phase with a piano and a “descending” violin. A choir can be heard away in the distance over the superb solo piano passage before the guitar, bass and drums move things up a notch. Just after 8 minutes, the sound of the cello, together with a solo violin is all that can be heard, painting a scenario of loss and desolation (at least to me), and this takes the opening sequence out. An amazing piece of music to start this album, which makes the listener want desperately to hear what the rest of the album holds.

The shortest track, “The Wizard of Altai Mountain” (4:52) is more of an up-tempo styled track, but is still sparse in its composition, led along by that powerful emotive voice, before an accordion picks up behind the voice and then around the 2:30 minute mark, the song changes into a sort of accordion band, entertaining a crowd, with an amazing violin passage over the top of everything. Cue then the return of a more solemn accordion piece as it ends on an ambient note.

A return to “I’ve Been Walking Pt 2 a+b”, (12:30) is possibly more atmospheric than Pt 1. Voices, piano, muffled drums and bass carry the song along painting amazing aural landscapes as it moves almost serenely along until there is a little more urgency creeps in. Suddenly the music is replaced by an old “scratchy” vocal recording which moves into a piano passage and then a return to the full band sound, prior to the “normal” vocals reappearing. A short burst of the “scratchy” vocals merges into the superb violin/piano combination which leads into the second phase, and although very sparse, the atmosphere generated is almost electric. This is a stunning track which slowly gives way to the final track of the album.

The tour de force of this album must surely be “Death Room Pt 1, 2 and 3” (18:44), which starts very differently with some industrial noise and a repeated 3 note riff that is maintained in the background. Add in some “sawing” violin which weaves in and out, and the stunning atmospherics generated by this phase are almost beyond belief. Every so often there is the return of the superb piano behind the voice, almost like a “security blanket.” There is an almost choir-like soulful backing behind the voice at times. Bass rumblings move the track into its second phase and there follows an amazing violin passage together with strings which seems to flow and fit the track so well. The entry into the third phase of the track has another beautiful piano passage behind the voice and then a passage of piano with a guitar away in the distance. Bass rumbles herald the move to the finale and a return to the industrial noise that began the track, escorts it out.
This is the type of album that once it has finished you are required a moment or two to ponder over the enormity of its achievement. It is a truly stunning album that all Gazpacho fans are likely to go into raptures over, but new listeners to the band should give the album several plays, as it is very definitely a “grower.”

Demon is a very dark, atmospheric, engaging album that achieves all it set out to do. The band realize that aural soundscapes can be produced in what appears to be a very simplistic form, but this requires superb musicianship and a deep understanding of what they are trying to achieve.

My advice is to listen to this album several times and then make a space for it on the CD shelf. Demon gets both the “One to Buy” and “The Experience will last Forever” stickers on the cover.