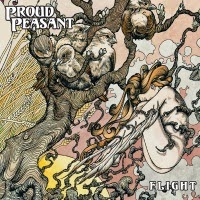 I was very interested in this release when it landed on my desk as I had been aware of the band, Proud Peasant, via Twitter for quite a while. The album, Flight, after only one listen certainly does not disappoint. Proud Peasant is the brainchild of Zander Rapstine, who had previously been a founder member of the band The Evildoers, back in 2003, but after 8 years, he was looking for something different. In 2011, he turned his back on the pop/rock material of this previous band and strode purposefully towards his new direction that of classic prog rock, music he had loved since his late teens.

Xander had produced three lengthy compositions but included no vocals with the initial recordings, recordings that were inspired by such luminaries as Mike Oldfield, King Crimson, Gentle Giant and Genesis. Late in 2011, the band, Proud Peasant, finally came into being. The band is a four piece comprising, Zander (electric/acoustic guitars, mandolin, ukulele, melodica, glockenspiel and percussion), Jay Allen (keyboards and piano), David Hobizal (drums) and Kyle Robage (bass and fretless/acoustic bass). Mark Poitras (keyboards, guitars, bells) has joined the band for live shows and the recording of the next album.  Also appearing on the album, Flight, are several guest musicians playing, strings, brass and woodwind instruments, as well as three soloists and The Proud Peasant Choir.

Flight is a three track album with a running time of around 45 minutes with the opening track, “The Prisoner,” the shortest track, but still 12:28 minutes in length. The longest track on offer is track two, “Awakenings” which stops the clock just shy of 20 minutes (19:34).

The opening track of the trio on offer on Flight is, “The Prisoner” (12:28) and it starts with an exquisite acoustic guitar passage heralding the track in, before other instruments join in. There is a thudding drumbeat and then around the 1:30 minute mark the sound starts to really build. Superb guitar and keyboards carry the song along when an electric guitar meanders in and out before the sound gets stripped back to the drums and acoustic guitar. More insistent drumming then heralds in the next part of the track, with synths and a stunning electric guitar playing in a dreamlike manner. The sound builds again with the other instruments appearing, and then around 5 minutes, there is a gentle synth and mandolin passage as the song continues to flow effortlessly. An almost pastoral sound has built up before a more insistent synth lends a hand. Around the 7 minute mark, the track changes completely with the introduction of some of the brass instruments, backed by some “military” style drumming and a passage of plucked violin leads into a plaintive trumpet theme. This scenario calls to mind the sort of Mexican scrublands epitomized in those classic Clint Eastwood westerns. There is then a return, behind the trumpet theme, of the earlier themes as the track moves on its way towards its 12:28 minute finale. “The Prisoner” is an excellent starting track which leads onto track 2, “Awakenings,” with the sort of voices heard in a mythical tale. As the track fades, the last thing that is heard is “I now present you with the Keys to the Kingdom.”

“Awakenings” (19:33) has a gentle guitar intro quickly joined by a superb “church” style organ with a simple synth passage highlighting the melody. The track then dives into a Russian “Cossack” style dance section which then repeats, with the gentle opening melody flitting between. This track has such swings in the opening few minutes that the attention of the listener is well and truly drawn in. A pastoral passage enters around the 4 minute mark and continues to build before entering a much faster guitar led passage. A passage with what sounds like a deliberately de-tuned guitar/synth moves the track into a more majestic sounding phase. Around the 10:30 minute mark the brass section makes another appearance with a dreamy melody backed by a glockenspiel (?), which then evolves into a very jazzy piece. A short instrumental solo by a rarity in a prog recording, the ukulele, leads the track into an ethereal female choir with the lower male voices entering before the instruments edge themselves back into the track and move it towards its finale. There is some wonderful synth passages within the outro prior to the sound being stripped back to allow a gentle ending.

The final track on Flight, “The Precipice” (13:20) arrives with an insistent drumbeat and bass riff before the guitar and synth provide a melody over the top. This is repeated before the guitar and synth begin to soar and take the track to new heights. There follows an exquisite passage featuring the flute which moves the track along, allowing the listener to let their mind meander through the atmospheric soundscapes that Proud Peasant generate. The majestic sound builds with guitar and choir and then becomes more pastoral again flowing seamlessly along led by keyboards and then the choir re-enters as the track moves to its finale.

I always feel that instrumental albums can tread a very precarious path between the superb atmospheric entity that they set out to be and the “dark side,” when the listener craves for the entry of some vocals to lift the album. Proud Peasant can rest easy with Flight, which draws the listener in at the start and keeps the interest until the dying echoes fade away. A quote on the album insert sums it up eloquently, “the soundtrack to sublime dreams and wicked nightmares.”

Flight is a stunning debut album that deserves a space on many peoples’ CD shelves and another nugget gleaned from the booklet included, mentions that the follow-up album, Communion, seems to be already underway.