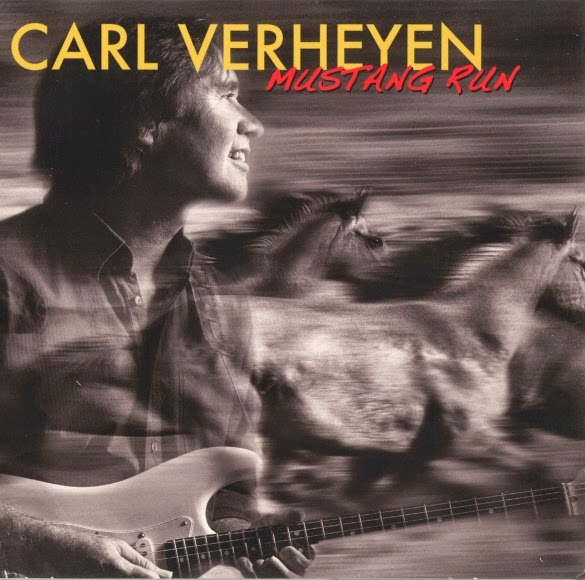 “Carl is known as a studio guitar player but he’s much more than that. His records have the great feel of a live player. He plays with a lot of feeling” - John Fogerty

Los Angeles, CA - Much to the excitement of guitar players and Supertramp fans worldwide, guitarist Carl Verheyen has released his new CD 'Mustang Run'. In his 40-plus years of playing the instrument, Carl Verheyen has created a wildly successful, multi-faceted career. He is a critically-acclaimed musician, vocalist, songwriter, arranger, producer and educator with 11 CDs and two live DVDs released worldwide. Carl is commonly regarded as a guitar virtuoso capable of playing any style of music with remarkable mastery and conviction. He has been one of LA’s elite “first call” session players for the past 25 years, playing on hundreds of records, movie soundtracks and television shows. Carl has graced the pages of countless industry publications and been the subject of numerous articles chronicling his rise to the forefront of the modern day guitar scene.

Says Carl about his new CD release, “My goal was to break out of the mold of Carl Verheyen Band CDs and do a progressive instrumental album. I wanted the opportunity to weave thick textures of sound using dozens of instruments and tones. My motivation was the sheer joy of hearing those sounds in the air!”

“We’ve been friends for many years and Carl has always amazed me with his versatility and technique. He’s a fine player.” - Albert Lee

Carl has won numerous polls and musical honors in the US, Germany, France, Italy and the UK. A member of the smash hit British rock group Supertramp since 1985, Carl has played to millions of enthusiastic fans in sold out arenas worldwide. As the creative force behind The Carl Verheyen Band, he has released an impressive and eclectic discography that showcases his endless talents across a wide array of musical genres. Carl's musical influences are just as diverse and range from George Harrison, Eric Clapton, Mike Bloomfield, Alvin Lee, Leslie West to Miles Davis, John Mclaughlin, Steve Morse, Chet Atkins and Andy Summers, among others.

“Every time I start to feel good about my playing and general overall knowledge of the guitar, I will get together with Carl and see truly how far I have to go. I am proud to call him my friend. A master of the guitar and a hellava nice guy to boot.” - Joe Bonamassa

'Mustang Run' features performances by some extraordinary musicians, which includes Simon Phillips, Chad Wackerman, Jerry Goodman, Bill Evans, Jimmy Johnson, Stuart Hamm, and Gregg Bissonette. In regards to the assortment of legendary music artists that grace his new release, Carl explains, “My previous CD called 'Trading 8s' was a collaboration with some of my guitar player friends. I had Robben Ford, Joe Bonamassa, Steve Morse, Scott Henderson, Albert Lee and Rick Vito trading solos with me. On 'Mustang Run' I wanted that inspiration to come from the rhythm section, so I called different bass players and drummers to suit the songs. I love to play with musicians that I have a deep musical relationship with, because the studio scene in LA breeds hundreds of 'casual' musical relationships. The great players on 'Mustang Run' are all friends that I've known and performed with for years.”

A much sought after studio musician, Carl plays on other artists’ CDs whenever his busy schedule permits. He has recorded and played with a virtual who’s who of the music industry. His vast collection of movie soundtrack and television credits are enviable. Carl was heard by 67, 000,000 people as a featured soloist at the 2009 Academy Awards. He will also be heavily featured in the forthcoming film documentary about the electric guitar, 'Turn It UP!'

“Carl is a true pro and a great player/musician. He can do anything, and as one who is supposed to do this, me (ha-ha), Carl comes through with heart and soul and is really not only an awesome musician but a really good guy. That counts ALOT in this biz, especially these days.” - Steve Lukather

On the educational front, Carl has produced two instructional videos called 'Intervallic Rock Guitar' and 'Forward Motion' as well as various on-line lessons. He also has a book/CD detailing his unique “intervallic” style called 'Improvising Without Scales'. Another book entitled 'Studio City' is a compilation of all the columns Carl wrote for Guitar Magazine between 1996 and 1999. He has written a monthly column for Chitarre, Italy’s #1 guitar publication as well as Guitar World and Guitar Jam Daily, a website devoted to serious guitarists. He currently writes a monthly column for Guitar Player, contributes to other guitar publications, and blogs regularly for GuitarPlayer.com and his own site. Carl also lectures and teaches at clinics and master classes regularly when not on the road.

“Carl is so overwhelming to sit in a room and jam with, let alone his playing on records and stage. You get the impression there is no style or territory he is unable to explore.” - Brad Paisley

Carl recently co-designed a signature guitar with LsL Instruments, the “CV Special,” combining the best elements Carl seeks in his ideal guitar; they are now available for purchase worldwide. As if that weren’t enough, working closely with Dean Markley, Carl developed a line of signature strings for the electric guitar that perfectly balance the tremolo bridge of the Fender Stratocaster, the Carl Verheyen Balanced Bridge Helix HD string set .

“Carl is one of those experienced, great players that you could put in any situation and get a wonderful guitar solo. I personally love the fact that he enjoys what he does and radiates positive energy whenever I have seen him.” - Steve Morse

In closing Carl has this to impart, “Before I made 'Mustang Run' I pulled out about 10 CDs that I seem to listen to all the time. None of them were 'shredders' or heavy bombastic music, but none of them were 'easy listening' either. I realized they all had melodic qualities that made them endure the test of time. So my main goal: make a record the bears repeated listening. If you discover new things with each play I've done my job!”