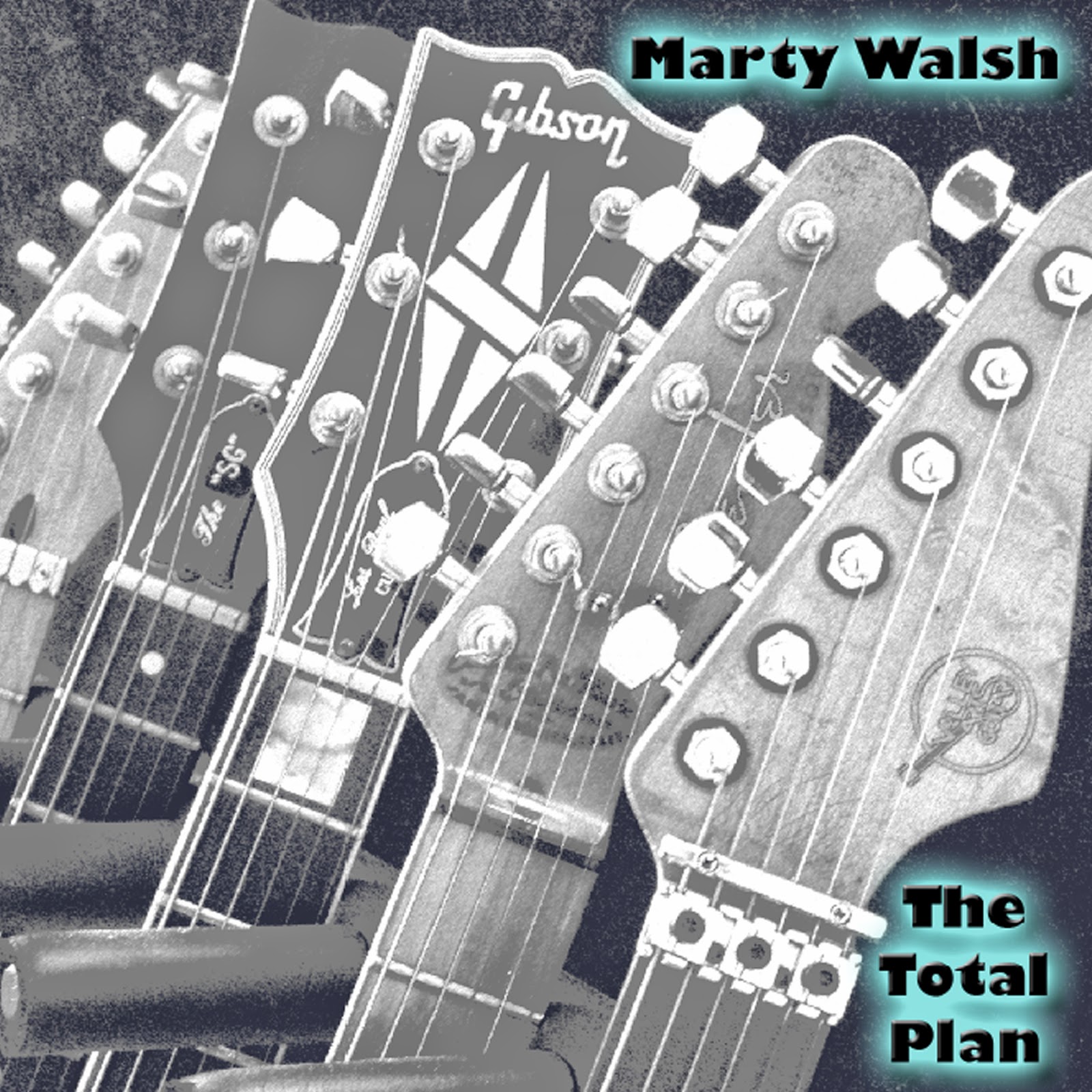 Says Marty, “Everyone on the album are musicians that I have close personal and working relationships with. Billy and I did an album that was released in 1996 under the band name The Key. People like John Robinson, Abe Laboriel, Michael Ruff and everyone else on the album I have worked with for years. When I came up with this idea I asked all of these wonderful musicians if they would play on one track for me. Graciously they all accepted.”

Marty Walsh is an assistant professor in the Ensemble and Music Production departments at Berklee College of Music in Boston, MA. A veteran of the LA studio music scene, he has worked as a guitarist with some of the biggest names in the business. The early 1980s found him on the hits “9 to 5” by Dolly Parton, “She Works Hard For The Money” by Donna Summer, and “Heartlight” by Neil Diamond, to name a few. He also recorded with John Denver, Eddie Money, Kenny Rogers, Sheena Easton, and Julio Iglesias, among others. In 1985, Marty played guitar on the Supertramp album 'Brother Where You Bound' and then toured with the band in 1985-86 and again in 1988 after playing on their 1988 release 'Free As A Bird'. Continuing to do recording sessions into the 1990s, he also was a part of the live band on the Nickelodeon Television show 'Roundhouse' which was critically acclaimed and ran from 1992 through 1994. In the late 90's Marty played guitar on numerous Curb Records releases including three of Leann Rimes' albums, 'Sittin On Top Of The World', 'Leann Rimes' and 'I Need You', whose title track set the record for weeks (54) in the top 40.

Most recently, he can be heard on the Freddie Jackson single “Until The End Of Time”, which reached the number 1 spot on Billboard's R&B charts and stayed on the charts for 26 weeks. And now much to the anticipation of guitarists and musicians everywhere, Marty is releasing his first (instrumental) solo album 'The Total Plan'!

Says Marty, “Being an instrumental album it is simply about the music. There are a few things conceptually that I was trying to achieve with this recording though. The first being the fact that I wanted to make an album of music that I felt would appeal to the masses. The album is not a Jazz album necessarily, it's really more of a pop record. While there are improvised solos, the focus of the record is much more about the melodies and arrangements of the songs, which hopefully are memorable. The second thing that I wanted to achieve was making a record with many of the people that I've worked with over the years. I literally enlisted musicians for this project that I had worked with closely going way back to when I first started touring and doing recording sessions, and then also tapped into some of the faculty and also young musicians that I have worked closely with at the Berklee college of music. There are ten songs on the album and each song has different groupings of personnel. I also feel that stylistically the album is quite diverse, which actually came about from tapping into all of these various musicians who brought their own identity to the project.”

Marty's new album showcases a variety of styles, which is a reflection of his vast musical influences. He explains, “While I am primarily a guitarist, and my guitar playing is the focus of the record, I don't feel like my approach to the instrument is like a lot of other guitarists. As a young musician growing up, of course I was influenced by people like Eric Clapton and Jimi Hendrix, but then growing up in Los Angeles, guys like Larry Carlton, Jay Graydon, and all of the other LA studio guitar players that I had so much respect for certainly were extremely influential in my development. But even more influential than all of the great guitar players are a host of other musicians. I have always had the tendency not to focus on guitar players and their approach to the instrument. Music that has influenced me over the years has tended to be from piano players, songwriters, people that compose memorable music and also many of the great producer/arrangers that I have worked with. Guys like Michael Omartian, the late Michel Columbier, and the late Tom Dowd. I had the good fortune to actually work with these people closely in the recording environment and learned so much about composing and arranging. That's the kind of thing that I feel is really so important in moving people emotionally with music. Hopefully that's what this album will do, move people emotionally.”

“Marty Walsh has made a fine album, featuring some red-hot musicians beside his heartfelt guitar playing – the sounds he wrings from his guitars are strong, melodic and exciting.” - John Anthony Helliwell (Supertramp)

“Marty Walsh is an amazing guitarist and songwriter. I had the pleasure making a record with him called 'The World Is Watching' (the band was called The Key). We met in 1986 when he was on tour playing guitar with Supertramp for their 'Brother Where You Bound' record. My band Lodgic opened for them and so we hung out backstage and became fast friends and have been ever since. I'm very happy to see Marty going for it with his new record and was honored he asked me to be a part of it too!” - Billy Sherwood (YES/CIRCA:)

“Marty Walsh is one of the most soulful musicians I have known. His musicality shines through any band he has ever been in. This new solo CD reflects his funk, soul and rock roots. It's a must have for all.” - John “JR” Robinson (Rufus/Eric Clapton/Steve Winwood/Mike Oldfield)

“I have been good friends with the near legendary Marty Walsh since our Glendale/Burbank, California days. He was always known as the 'Boy Wonder' on the guitar back then. And still is today. If you're ever stuck for the next part of your song... don't worry, Marty's got it covered.” - Scott Gorham (Thin Lizzy / Black Star Riders)

“Over the years I have had the good fortune to work with some of the greatest guitar players in the world. It runs the gamut. Rock, Funk, Jazz, Pop. There are a handful that can shred in all these fields. Marty is one of them! On 'The Total Plan' Marty went to 'The Shed', with a few friends, and came out with a real gem. It rocks, it inspires, it grooves, and Now is the Time, to check it out!” - Tommy Vicari (Grammy award winning engineer and producer)

In support of his new CD release Marty has been working with a videographer, trying to determine which songs would be good choices for music videos and how to approach that. He is also currently working on putting together the personnel for a live band. Although, since the record has so many different people on it, putting a band together that can play all of his music live is a bit of a challenge. The good news is that being in Boston and teaching at Berklee, Marty has access to some unbelievable young talented musicians that will most likely be the members of this group. Also his son Ian played some keyboards on the record, and wrote a few of the pieces with Marty, so he is kind of a cornerstone to the live band.

In conclusion, Marty has this to relay to his fans and listeners, “Just sit back, relax and enjoy......put this album on when you have people over. I do feel that it is the kind of record that you can put a set of headphones on and listen intently to, as I feel that it has a real 'flow' to it in terms of taking you on a bit of a journey from song to song. But it's also one that you can put on in the background and just let it be a 'feel good' record. Hopefully if people put this album on for friends in the background over casual conversation the question will be 'What is this music that's playing?' and then 'Where can I get it?'”

To purchase: Marty Walsh's 'The Total Plan' go to:
http://cdbaby.com/cd/martywalsh