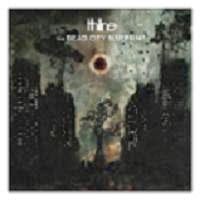 It has been over ten years since the music world has last heard from Thine. Their critically acclaimed second album, In Therapy, was released in September of 2002. In the following years, they toured and started to work on their third album before life got in the way.  The band members never lost touch, and came together in 2011 to start work on their long awaited third album, The Dead City Blueprint.

Formed in West Yorkshire, UK, in 1994 as Blood of Thine before a name change in 1996, Thine is made-up of Paul Groundwell (lead guitar), Alan Gaunt (vocals), Dylan Rhodes (guitar), Richard Swift (bass guitar), and Dan Mullins (drums).  They made their first waves with 1998’s A Town Like This and solidified their reputation with 2002’s In Therapy.  Now in 2014, The Dead City Blueprint marks their triumphant return as a premier progressive rock group.

Their special blend of progressive rock/metal with some experimental elements thrown in is evident on the first track.  With its haunting opening, “Brave Young Assassin” provides a clear look into the somber atmosphere of The Dead City Blueprint.  Not to mention that Gaunt’s voice is just perfect for the type of music that they play and serves to enhance the music.  Following it up is the subdued “Flame to the Oak.” “Out of Your Mind and into a Void” is a spacey progressive rock song with music, especially the guitars, which really sinks in deep. It is the type of song where the music will simply take you away from it all.  ”The Precipice” is a rock song with an up-beat tempo.

“The Dead City Blueprint” is an incredible song.  The vocals are at their emotional best here and add to the poignant atmosphere.  It is one of those songs that get the listener completely caught up in it.  “A Great Unknown” does a great job of combining the dark and emotional levels of the previous songs.  Lyrical and moving, “The Rift” pulls out all the stops with a memorable guitar solo.  Heading towards the end, “The Beacon” and “Scars from Limbo” ensure that the quality of songs is as high as ever and continue to show Thine’s mastery of their dark and haunting sound.  “Adrift through the Arcane Isles of Recovery” is a serene ending to a great album.  It is like floating in the ocean as the ocean starts to pass under the horizon.

Thine’s The Dead City Blueprint is nothing short of a masterpiece.  It is the type of masterpiece that takes time to appreciate.  It took me a few listens before I was fully aware of the greatness of The Dead City Blueprint and it was worth the extra time.  If you are looking for a top quality progressive rock with metal roots, then this is what you need.  I just hope that Thine does not take another twelve years to release another album.


Sell your beats online at ReverbNation.com
By Keith "MuzikMan" Hannaleck at June 04, 2014