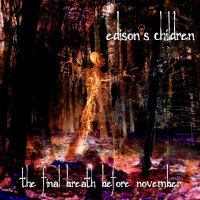 Edison’s Children I first came across in 2012, with the release of the debut album, In the Last Waking Moments, which was a stunning first release. Further down the line we now have the follow up album, The Final Breath Before November, and a second album can sometimes be difficult after the huge success of a first release. The album has been featured a few times on the radio show and is an evolution from the first which suggests the two main musicians have eased into a position of confidence in what they are doing and this shows through.

Edison’s Children was formed back in 2006 during a Marillion tour when, in the lead up to a sound check, problems led to Eric Blackwood (musician, photographer, author and special FX props technician) being asked to play Steve Rothery’s guitar while the problem was looked into. Pete Trewavas, Marillion bassist, appeared and joined Eric on keyboards (Pete being an excellent guitarist and keyboards player) and thus the foundation for Edison’s Children was formed. Working together as Edison’s Children was not the easiest, as Pete was also a member of Transatlantic, but ultimately, the debut album did see the light of day.

The Final Breath Before November, album release No 2, didn’t take quite as long to appear and Edison’s Children was still a duo who utilized guest musicians when required. Pete and Eric are responsible for bass, lead guitar, rhythm guitar, lead vocals, backing vocals, synthesizers and programming, with the guests, Henry Rodgers on drums and Wendy Farrel-Pastore on (haunting) backing vocals.

The Final Breath Before November is a 4 track album, but the epic fourth track is a 67 minute suite made up of 13 sections, and the total playing time of the album is around 78 minutes, which is very close to the maximum you can squeeze onto a CD and maintain the quality.

The opening track, “Final Breath” (4:03) is a gentle introduction to the album with synths, basses and acoustic guitar slowly building up the soundscape, which flows along with little hook passages. Midway through the track there is an insistent synth melody and the track then builds up prior to Pete’s unique “breathy styled” vocals which sit perfectly within the music, and then it is gone and onto track 2, “Light Years” (6:05). This is very reminiscent of the commercially successful track (“A Million Miles Away”) from the debut album, with beautiful melodies which sweep effortlessly along. There is a haunting guitar melody which is just behind the vocals and grabs the attention without ever becoming intrusive. The track starts to fade with an acoustic passage and enters “The Fading” (1:27) which continues the gentle acoustic guitar until it gives way to the “Silhouette” suite.

“Silhouette” (67:19) can be broken down into 13 individual components but it is best dealt with as a single track, and although in excess of an hour (and many complete album releases don’t reach this length), it is a majestic piece of music. The track has an array of musical skills on show with acoustic and electric guitar excellence; melancholic, pained, and at times fragile, vocals; synths that float here and there and weave in and out, leading at times, but unobtrusive at others; rich lush orchestrations; stunning percussion work; wheels from the symphonic to the spacey; can appear light and airy then dark, desolate and somber, even at times a little reminiscent of some of the material produced by Hibernal.

The epic track moves through many phases from the gentle acoustic, to the jagged electric, creating a myriad of different soundscapes to let the mind of the listener wander freely, wherever the aural palette of Edison’s Children takes them.