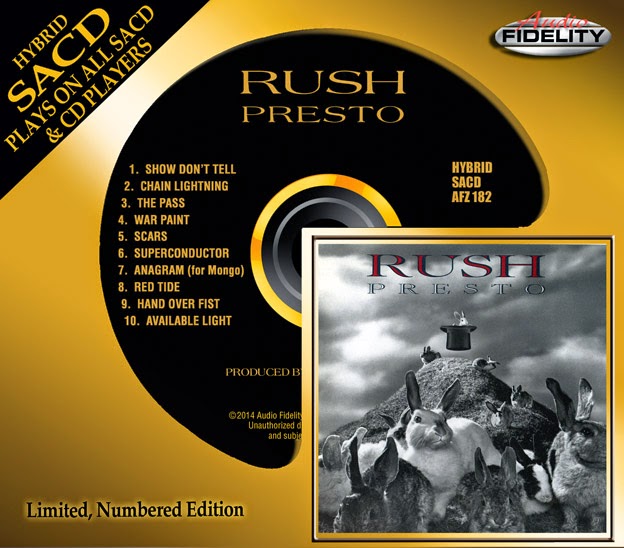 “...arguably Rush's most original effort ever!”

Camarillo, CA - Rush fans rejoice! Marshall Blonstein's Audio Fidelity will be reissuing Rush's legendary 'Presto' album on limited numbered edition Hybrid SACD! Rush were never a band known to play the same sort of thing for any extended period, they often pushed the boundaries of rock and their formidable list of albums helped to bring prog to a wider audience. By 1989 a change was inevitable and with their 13th studio album, 'Presto', it was a change for the good. 'Presto' marked the beginning of a transition period, moving away from a sound dominated by synthesizers and toward more traditional rock instrumentation. The synths were toned back while the guitars were brought up to a reasonable level allowing the emphasis to return to the rhythm instruments, resurrecting the groove that Rush maintains so very well.

Geddy Lee and Neal Peart are in good form, but Alex Lifeson is the real story, he can be heard in grand force and even pulls out the acoustic guitar. Lifeson’s leads in “Superconductor” are brilliant, Geddy Lee does great solo work on “Show Don't Tell” and Peart’s percussion on “Scars” features a complex tribal rhythm drum pattern in which both acoustic and electronic drums are utilized - a synthesis of the two that's accessible without compromising. Each of these tracks, along with “The Pass,” reached the top of the Album Rock Tracks charts with “Show Don't Tell” hitting #1. 'Presto' climbed to #16 on the Billboard Top 200 album chart.

Rush made a stab at greatness with 'Presto' and Rupert Hine's deft production had much to do with its success.