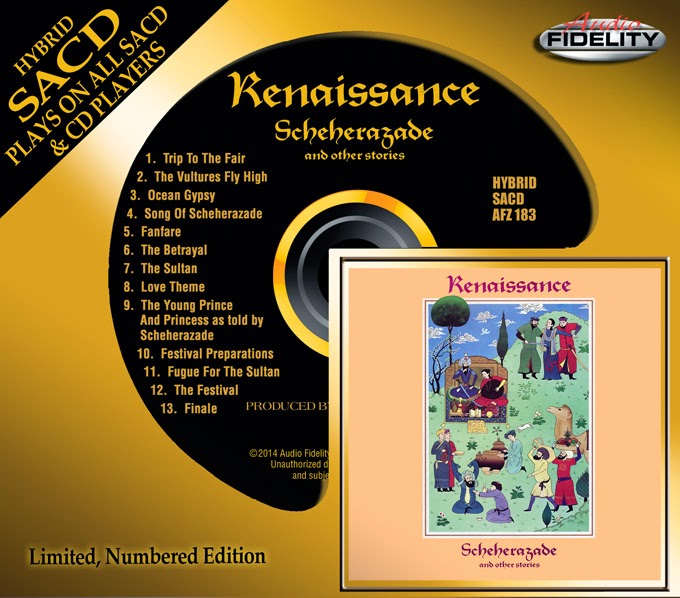 "One of the signature albums of 1970's progressive rock!"

Camarillo, CA - Prog fans worldwide are buzzing with excitement over the forthcoming release of Renaissance's legendary Prog album 'Scheherazade and other stories' by Marshall Blonstein's Audio Fidelity on limited numbered Hybrid SACD. 1975's 'Scheherazade and other stories' is a beautifully crafted album, expertly sung and played by Renaissance. The recording is filled with lush, orchestral progressive pop-rock and considered by many music critics to be their best album. Unlike other prog-rock groups, Renaissance eschewed much of the technology in favor of acoustic instruments and orchestral arrangements. Electric guitars and synthesizers were seldom used, giving the band's music more of a symphonic sweep.

"The group's magnum opus - The music is absolutely stunning!"

Renaissance is a band that went through various permutations, the best known being the line up featured here and they shine throughout the album: Annie Haslam's soaring, pure vocals, John Tout's considerable piano prowess, Jon Camp's imaginative bass, Michael Dunford on guitar and Terence Sullivan on drums.

The work is unique because it represents a rare example of musical collaboration between Dunford and the rest of the group. Dunford and lyricist Betty Thatcher wrote the three vocal sections, keyboard player John Tout wrote the opening fanfare and fugue sections, with bass player Jon Camp working with Dunford and Tout on the other sections. The orchestrations were arranged by Tony Cox.

There are only four pieces on the album: "Trip To The Fair" is a heavenly 11-minute dreamscape. "The Vultures Fly High" is a short but very effective prog-rocker. "Ocean Gypsy" is a gorgeous song, and one of the band's all-time classics. And then, of course, there's the 25-minute, nine-part epic, "Song Of Scheherazade," one of the highlights of rock history featuring the prog icon's unique interpretation of the Scheherazade legend accompanied by the London Symphony Orchestra and a chorus. The classical tale is told about the Sultan and the magical woman, Scheherazade, who ultimately wins his heart.

Aficionados of classical music will also appreciate the album.

Produced by Renaissance
Mastered by Kevin Gray at Cohearent Audio