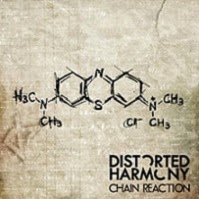 I think that Progressive Metal is one of the strongest genres out there in music today, with no shortage of talented bands making amazing music that will still be listened to decades later.  Progressive bands are unafraid to take risks and push boundaries with their music.  Not caring about what mainstream sound is selling at the moment, they create music the way great writers or painters create new worlds.  Distorted Harmony is no exception, adding another pillar to this already sturdy genre.

Based out of Tel Aviv, Israel and founded in 2010, Distorted Harmony consists of Misha Soukhinin (vocals), Guy Landau (guitars), Yoav Efron (keyboards), Iggy Cohen (bass), and Yogev Gabay (drums).  Describing their sound as “a delicate combination of the complex progressive metal, the unique harmonies of modern Jazz and Classical music and some heavy shit,” Distorted Harmony established themselves as a leading progressive metal band in Israel with their 2012 debut album, Utopia.  Their sophomore album, Chain Reaction, seeks to build upon that foundation and launch Distorted Harmony toward global prominence.

Their self-description is neither boasting nor is it facetious. “Every Time She Smiles” is the perfect introduction to the sound of Distorted Harmony.  The ambient opening gives way to a heavier sound in the beginning instrumental part for a perfect blend of harmonies.  Then Misha Soukhinin’s soothing voice chimes in to take the song to new heights.   “Children of Red” wastes no time by coming out heavy and unrelenting.  Its juicy riffs, funky bass, and catchy chorus make for one unforgettable song that will leave listeners hypnotized.  Songs such as “Hollow” are more traditional.  It is a straight-up hard rocking tune with an excellent guitar solo that stands out prominently.

They also know how to let the music do all the taking with the instrumental “Nothing (But the rain).”  It is the type of song where the music is constantly rising, moving toward a cathartic conclusion.  Then there is the acoustic “As You Go.”  It is a beautiful sounding song, with thanks to those vocals that are so calm inducing.  Chain Reaction goes out with authority, as its final two songs are bewildering in their brilliance.  With its crunchy chords, crushing drums, and a sense of uncontrollable energy, “Natural Selection” is a progressive metal masterpiece.  “Methylene Blue” starts off slow and controlled, rising toward its eventual release half-way through the song.  The drums and guitar take over with the force of a conquering army.  It is off to the races with a cavalcade of sound before returning to the serenity of the beginning, which leads us out.

Chain Reaction is the sophomore album that every band dreams of recording.  The elegance, intricacy, and complexity of it has me thinking of some of my favorite progressive bands, such as Tool and Pain of Salvation.  This is no mistake, as these guys have proven that they belong with the best that the progressive metal world has to offer and Chain Reaction is the proof.

Tracks:
Every Time She Smiles
Children of Red
Misguided
Nothing (But the rain)
As One
Hollow
As You GoNatural Selection
Methylene Blue