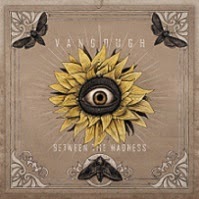 Describing themselves as a “Brave, eccentric and chemically unstable… [and] a sunrise of melodic cocaine for your ears. A Pandora's Box of exotic flavors mixed with harsh textures that can only be described as human,” Vangough is the best progressive metal band that you have probably never heard of before. I would say that they are criminally unknown. Named after the famous Dutch painter, Vangough come from Oklahoma City, Oklahoma, and consist of Clay Withrow (guitar/vocals), Jeren Martin (bass), and Kyle Haws (drums).

Between the Madness is Vangough’s third album and it is one for the ages. It is heavy, dark, and a seemingly unrelenting release of creative energy. It is the type of music that gets better with each listen and demands your attention every time. Backed by powerful vocals, guitar driven melodies, and meaningful lyrics, Between the Madness is progressive metal at its finest.

The dark journey of Between the Madness beings with “Afterfall.” It is a kaleidoscope of sound, like a journey through a progressive metal version of Alice’s Wonderland. The music perfectly complements the emotions conveyed through the vocals. “Alone” is another striking song lead by its crushing music and powerful and personal lyrical content. “Separation” is like listening to some type of controlled chaos. It is an intense display of musicianship that will have you reeling when it is over.

With its excellent guitar solo, “Infestation” is striking in its display of power. The raw and primal energy just bleeds through the vocals, making for a lasting impression. Following it up is “Schizophrenia” and, at this point, I am convinced that I am in the presence of genius and am listening to a true masterpiece.  Vangough is not just about a heavy, intense metal sound. The serene “Between the Madness” is a great change of pace. A violin has never been more metal.

The serenity is short-lived as songs such as “Vaudeville Nation” and “O Sister” bring back the energetic and potent sound to make for some amazing and unforgettable music. “Thy Consumed Flesh” is a thrilling instrumental with an absolutely punishing sound. “Depths of Blighttown” is a short instrumental with an ominous sound. “Useless” demonstrates what kind of interesting music they can create and that they can still pull out surprises this far into the album, while providing biting social commentary. “Corporatocracy” and “The Abyss” bring the album home with Vangough’s signature sound, making for an album that is completely stunning from start to finish.

Vangough”s Between the Madness is a like a soundtrack to a dark and twisted dream that I would never want to end. This album showcases Vangough in top form and performing at their peak. It is definitely a masterpiece and a work that deserves to be lauded the world over. I can see without hesitation that this is a top-10 album of this year. These guys are the future of progressive metal and Between the Madness is the proof.