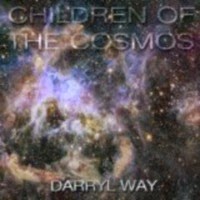 Darryl Way was formerly a member of the British Progressive rock band, Curved Air, but left the band after 3 albums and a hit single. (Interestingly, one of the latest reviews I submitted was the new Curved Air release, North Star.) Although sporadically returning to Curved Air when reformed at points, he has fronted his own bands, including Darryl Way’s Wolf and also released several solo works. His first solo album was released as far back as 1978, entitled Concerto for Electric Violin and I reviewed his 2013 released album, Ultra Violins, which was studio album number 8. On the table for review is the 9th album release from Darryl, called Children of the Cosmos.

The only musicians listed as being on Children of the Cosmos are Darryl Way (all instruments) and a female vocalist that is known only as Rosie, and she appears on only 1 track.

The album, Children of the Cosmos comprises 12 tracks with a playing time of around 56 minutes. The penultimate track, “An American Tale,” is the longest offering at 6:35 minutes, while “Don’t Look Back” at 3:38 minutes is the shortest on the album.

The opening, and title track of the album, “Children of the Cosmos” (5:18) starts with some synths and the characteristic violin appears almost immediately before Darryl’s voice enters with some excellent vocals. The whole feel of the track is that of the vastness of space with some superb synth passages and similar violin breaks. The mastery of Darryl Way on the violin shines through continuously on this track, designed to draw the listener in with memorable little themes which the mind quickly latches onto.” Children of the Cosmos” is a gentle introduction to this release and makes you look forward to what is about to be served up.  “Spooks” (4:02) is a more up-tempo, if darker sounding, track which again has little hooks within the music. Some majestic synth passages and a feel of Ultravox/Midge Ure style about it give the song a sort of retro hint without sounding dated.

“The Best of Times” (5:00) continues the up-tempo style and also highlights the synth sweeps and the violin passages, “Nature’s Way” (3:52) certainly changes the sound with a more staccato style to it but continues the melodic vocals and there are some nice acoustic guitar moments and the strings add a little grandeur to the track with the sweeping violin adding the icing.

The sound of a sitar adds another dimension to “Summer of Love” (4:46) and the track motors along with the violin interjecting little riffs in the background. The change in tempo is an unexpected twist into almost spoken lyrics which then evolves back into the original theme.

“Don’t Look Back” (3:38) is a very differently set out track with an extremely catchy staccato start and excellent vocals before the track is taken over by layered strings/synths and there is a sensation that a change is in the air. This change duly arrives with the violin which interjects a majestic classical feel to the proceedings. There is a Celtic feel to “Lagan Love” (4:38), which certainly allows the mastery of the violin to be highlighted as the track effortlessly glides along. When the strings are layered in the background, the violin takes on a more insistent tone and I found this track one of the best on the album. It is a very different “take” on the same theme that the Irish Celtic rock band, Horslips, supplied on an album in the 70’s.

There then follows a trilogy of tales, namely, “A Winter’s Tale” (4:34), “A Modern Tale” (5:24) and “An American Tale” (6:35), which are all very well performed tracks, but by this time I was beginning to detect a little bit of déjà vu (of the aural variety). The closing track of the album “Children of the Cosmos,” is a nod to a classical composer “Sergey” (4:49) and is a superb chunk of classical violin.

My initial response to this album was very enthusiastic as the opening few tracks are all excellent, at least to my mind, but there was a point where the tracks seemed to lose their uniqueness and started to sound like earlier sections. Several listens has simply confirmed this feeling of “an album of two halves,” whereby, while the opening section remains exciting and excellent music, the excitement wanes towards the latter tracks.

Having reviewed Darryl’s last release, Ultra Violins, and given 3.5/5 stars, I certainly find this release, Children of the Cosmos a step above that, having thoroughly enjoyed part of the album. It is unfortunate that the superb level of the earlier tracks drop off a little towards the end. This is an album that I will dip into again and again as there is some amazing material on show.

As I always try to point out to readers of my reviews, it is a very personal view and I encourage people to get hold of the album in question and give it a fair hearing, as you might feel differently about it.

Tracks:
Children of the Cosmos
Spooks
The Best of Times
Nature’s Way
Summer of Love
Don’t Look Back
Fire with Fire
Lagan Love
A Winter’s Tale
A Modern Tale
An American Tale
Sergey