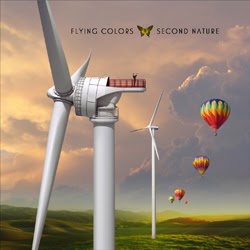 The UK’s Classic Rock magazine hailed the band’s debut as “fearless”, praising its “Journey-sized choruses” and referencing artists as diverse as The Beatles, the Red Hot Chili Peppers, The Doors, Muse and even Frank Sinatra.  In late 2012, the band toured the United States and Europe, dazzling fans with Flying Colors originals and selections from the catalogues of the five members. The chemistry can be heard on ‘Live In Europe’, a Number #1-charting Blu-ray, DVD, CD and vinyl package recorded and shot in Tilburg, Holland.

Schedules allowing, the protagonists had always viewed Flying Colors as a genuine band as opposed to a mere side project, and quietly yet purposefully they began writing a second studio album. From the first writing session to final delivery of the masters in July 2014, the process took almost a year and half, albeit in four distinct stages: writing sessions via Skype in January/February 2013, another burst of writing and recording at Neal Morse’s house in Nashville, a trip to Portnoy’s home that spawned five additional songs, and finally individual recording/arrangement over the internet throughout the spring of 2014.  “The first album was very much a blind date,” Mike Portnoy explains. “Although we already had ‘Team Dregs’ of Steve/Dave and ‘Team Transatlantic’ of myself/Neal, it was the first time that the five of us – seven if you include Bill Evans and Peter Collins – had collaborated together as a group. This time there was an existing chemistry, we had not only the prior experiences of making the debut album but also the 2012 tour as well.”

Sporting stunning artwork from the legendary designer Hugh Syme (Rush, Aerosmith, Def Leppard, Whitesnake) and bookended by two tracks of truly epic stature – ‘Open Up Your Eyes’ and the multiple-part ‘Cosmic Symphony’ – the album is every bit as breathtaking as the debut.  Portnoy stresses that the music’s proggier path was “not conscious at all.” The drummer continues: “Direction was never even discussed. We just did what we do. I think perhaps not having a producer to ‘trim the fat’ possibly led to the songs breathing and expanding a bit more.”  Perhaps Steve Morse sums things up best with the statement: “This is an album full of many layers. The more you listen, the more you can hear. It’s an album to keep listening to.”  The complete track listing is: "Open Up Your Eyes," "Mask Machine," "Bombs Away," "The Fury Of My Love," "A Place In Your World," "Lost Without You," "One Love Forever," "Peaceful Harbor," "Cosmic Symphony - I. Still Life Of The World; II. Searching For The Air; III. Pound For Pound"

Flying Colors will tour from October 2-14, across the United States, Europe and the UK.  Appearances are confirmed in: