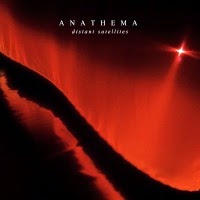 Starting out as a death/doom metal band back in 1990, Anathema has undergone a drastic evolution to the band that has just released Distant Satellites, album number 10. The debut album was released in 1993, entitled Serenades, and the previous studio album to this one was released in 2012, entitled Weather Systems. Between that release and the new album, I reviewed the live release, Universal, issued in 2013.

At the time of recording Distant Satellites, Anathema comprised 6 members, the Cavanagh brothers, Vincent (voice, guitar, vocoder), Danny (guitar, keyboards, voice) and Jamie (bass) together with the Douglas siblings, Lee (vocals) and John (drums) and Daniel Cardosa (keyboards, drums). Daniel Cardosa was a touring member of the band, but became a full member in 2012.

Distant Satellites is a 10 track album with a playing time nudging an hour in length (58 minutes).The longest offering on the album is the title track “Distant Satellites” with a running time of 8:36 minutes and “Firelight” is the shortest track at 2:49 minutes.

The opening track to Distant Satellites, “The Lost Song Part 1” (6:07), is the first of a three part track and enters with strings and keyboards before some frantic drumming ushers in the voice of Vincent Cavanagh. Vincent possesses a very powerful voice and it is ably backed up on this track by the crystal clear voice of Lee Douglas. The track powers along with insistent piano, drumming and layers of guitar adding the icing on the cake, so to speak. My problem with this opening track is that it doesn’t seem to go anywhere. The track builds in intensity, but there is no real shift in the music, it is the same from start to finish and I really wanted it to have some direction.

The second track, “The Lost Song Part 2” (6:01) has a gentle piano start before Lee Douglas takes center stage in a more angst ballad track. The band join in and the track moves along with some sections of building sound before the music drops away and gently makes an exit. This is a different style from the opener, but without that “je ne sais quoi” that pulls a listener into the music. “The Lost Song Part 3,” which is a few tracks further into the album, is more up-tempo and a return to Vincent on lead vocals. Drums and bass are the driving lynchpins of this track which again possesses an insistent piano theme. The guitar is a bit more prominent from time to time, but again I have that feeling that the track starts and ends, and when it does, any melody has just slipped out of my mind.

Named after the band, track 6, “Anathema” (6:56) is more of a slow burner before crescendo-ing into a superb violin, then guitar, passage. A good track without any doubt which leads into a track, “You’re Not Alone” (3:25), which I found a little out of place and seems to run the gamut of various styles in the short time it exists.

“Firelight” (2:49) is another track which seemed a bit “odd,” in that it seems to be nothing more than an instrumental bridge, utilizing church style organ, between the tracks “You’re Not Alone” and “Distant Satellites.” The title track (8:36) has a programmed drum feel about it with that superb voice from Vincent over the top and again I felt was one of the best tracks on offer.

The final track “Take Shelter” (6:18) has a more ethereal voiced Vincent over a subdued piano with some beautiful violin over the top. Some more programmed drumming, very similar to the last track, puts in a muted appearance but bursts into life as the song starts to increase in intensity, ultimately giving in to a full band workout. The last minute is a very poignant exit to a violin theme.

I struggled with this review of Distant Satellites as I genuinely do not dislike the album, it is just that at no point does the hand burst from the speakers, grab me by the throat and yell, “You will listen to this!” While the music on offer is played by skilled musicians, I felt that the spark required to ignite the album just wasn’t to be found.

Anathema followers will be eager to add Distant Satellites to their collections, but I am not convinced that this album will attract newer listeners to the band. As always, this is a very personal view, so give Distant Satellites a few listens to decide if you want to make a small space on your CD shelves.