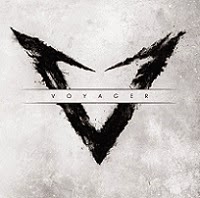 If there is one band from the progressive metal that you need to get yourself acquainted with, it is the Australian band Voyager.   Describing their sound as “Australian pop sensibility with modern progressive heaviness,” Voyager’s music will leave a lasting impression long after the final chord has been played.  Hailing from Perth, Western Australia, Voyager formed in 1999 and consists of Daniel Estrin (vocals, keyboards), Simone Dew (guitars), Alex Canion (bass, backing vocals), Scott Kay (guitars), and Ashley Doodkorte (drums).

V is Voyager’s fifth album and to call it a masterpiece is not a stretch of the imagination by any means.  It is just another remainder of why I think that progressive metal is probably the strongest genre of music going today.  It is hard not to come away from this album impressed.  They have all the right moves with seemingly no missteps.  They are highly creative and know how to blend various influences into their progressive metal sound.

Voyager knows how to hook an audience with its opening track.  “Hyperventilating” is the type of beginning song that gets one excited for the rest of the album.  It has the right touch of soaring metal riffs with pulsating drums and shredding guitars to get things popping. And then there is the chorus, which is just melodic and hypnotic goodness.  Following it up is the up-tempo, hard-rocking “Breaking Down.” It is another melodic and catchy song that is also has a very radio friendly sound.

With its energetic opening, “A Beautiful Mistake” is a vibrant song that becomes really memorable in its second half.  This is because of guest vocalist Zemyna Kuliukas and her hauntingly beautiful voice.  The blend of the two vocalists is astounding.  The short, spacey “Fortune Favors the Blind” leads directly into
“You the Shallow,” which is the type of song that seeks to destroy your ears from the beginning with some pulsating metal music.  The vocals are crisp and clear, as to be expected by now, and the tempo changes are done flawlessly.

‘Embrace the Limitless” switches things up, perhaps a little too much.  The synthesizer and the classic video game sound clashes a bit with the main rock sound.  I think that it is kind of song that might grow on some people after repeat listens, but not for all.  The synth-lead “Orpheus” makes for a great hybrid electronic/metal sound and the mixing of clean vocals and growls add a little something extra to the song’s atmosphere.  “The Domination Game” comes out killing it with some unrelenting metal riffs, which lead into a melodic chorus for the sprinkles on top.  The subtle and enchanting opening of “Peacekeeper” is like nothing else on the album.

The robust opening sets the tone for “It’s a Wonder.”  Its manic energy is electric and the sound moves fluidly between aggressive and melodic.  The hammering opening of “The Morning Light” is reminiscent of the theme for the Terminator movies.  It then moves to a more euphonic and uplifting sound.  “Summer Always Comes Again” is short and sweet and beautifully sad. “Seasons of Age” is a slow building song with a piano and drums before the guitar jumps in to spice it up.  The crisp drums end the album on a high note.

Voyager’s V is the kind of album that makes people become fans on the first listen.  It is unique, sophisticated, emotional, beautiful, and so much more.  I cannot recommend V enough to fans of the genre, and to others, this is the type of album that will broaden your musical horizons. It shows these music veterans performing at a top level, which is on display in every song. Voyager is the type of band who push the genre forward, and that is always a good thing when it comes to music.