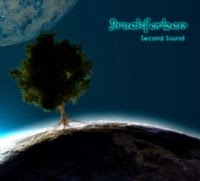 When this album, Second Sound, appeared for review, I thought back to the band’s debut, which was self-titled, Druckfarben, and was released in 2011. It is always interesting to follow the evolution of a band from album to album and it is obvious that the band have grown in stature and confidence in what they do. Originally formed around 2007, Druckfarben started off by doing covers of bands including  Yes, Genesis, King Crimson, Gentle Giant, Kansas and others of that ilk. Growing from this point, the band members started to provide their own compositions and have not looked back.

Druckfarben is a 5 piece band and comprises Phil Naro (vocals, guitar), Ed Bernard (vocals, guitar, violin and mandolin), Troy Feener (drums, percussion), Peter Murray (vocals, bass and violin) and William Hare (vocals, keyboards). Ed and Troy were old schoolfriends from the 80’s, so the beginnings on the band were in place long before anything came to fruition.

Second Sound is an 8 track album with a total playing time of around 56 minutes. The shortest of the 8 tracks is track 2, “In Disbelief” with a running time of 3:29 minutes and the title, and final, track “Second Sound,”  takes on almost epic proportions with a playing time of 18:48 minutes.

The album bursts into life quickly with the start to “An Answer Dreaming” (6:59) as there is a flurry of keyboard (Will Hare), ably backed by a very tight drum/bass pairing (Troy Feener/Peter Murray), before the chunky guitar (Ed Bernard) makes an appearance, which only leaves the vocalist join in. Prior to that there is a superb keyboard passage over the top of everything and then, eventually the stage is set for the vocals of Phil Naro to burst into life, just after the 2 minute mark. There is a touch of the Jon Anderson vocalisations about Phil, before there is a harmonious section, and then a return to a style which seems to encompass the classic Yes and gives more than a little nod to Spocks Beard. Superb atmospherics within the track as the sound floats from gentle keyboards/guitar to the fuller band sound and at around 5:15 minutes the tempo changes to allow a plaintive piano passage before the stunning guitar soars to take the track onwards, with the band building the sound slowly. “An Answer Dreaming” is a very satisfactory start to Second Sound.

Another brisk start to “In Disbelief” (3:29) with some excellent keyboards which then take a step back, allowing the guitar to take off before the keyboards reappear revitalised. I must admit to being a bit disappointed when the vocals appeared as they seemed a bit at odds with the superb music. So much potential with this track, but it just doesn’t hit the bullseye.

“Dandelion” (5:07) offers more excellent keyboards, the chance for Ed to show off a bit more guitar, as well as contribute some nifty violin passages, but while the vocals add a bit to the track, they still don’t seem to sit quite properly. “Liberated Dream” (4:26) accepts the baton from track 3 and shows a similar style with the keyboards/guitar driving the track along, but again I feel that the vocal sections just don’t gel properly, which is a real pity.

Track 5, “Long Walk Down” (5:03) is very different with beautiful piano, around which the more relaxed vocal actually fits perfectly along with the counterpoint melodies. The keyboards then have a terrific passage, revisit the vocals, then piano and subdued guitar sit just behind the voice before the piano is replaced by another keyboard. This is a track where it all comes together really well.

We are back to more familiar ground with “Surrounds Me” (7:23), before there is a total change for “Another Day” (5:23). A mandolin intro leads onto harmonies that gently take the track on with just a slight hint of discord from time to time, which then explodes into a keyboard extravaganza soon to be joined by guitar before every instrument disappears and the track runs out a cappella.

The epic “Second Sound” (18:48), has a piano/violin introduction which is very different to everything that has gone before, and certainly dips a toe into the water of Celtic territory, inhabited by the likes of Horslips. Just before the 3 minute mark, the full effect of the drums and bass boost the sound, although the violin still interjects a bit of the Celtic. The track really ebbs and flows with some superb sections filled with guitar, and at times, banjo, majestic keyboards and vocals that sweep in and out of the proceedings. This is a massive piece of work and I feel makes up for some of the other tracks apparent failures to fully integrate the music with the vocals.

Second Sound certainly shows an evolution of Druckfarben from the debut album, which I have to admit, I was not particularly taken with. There are moments of simply stunning music on show here, but I feel that Second Sound does not always work. “An Answer Dreaming,” “Long Walk Down,” “Another Day” and “Second Sound” I certainly found refreshing, different and most of all, interesting and exciting.

Second Sound is a difficult album to decide upon its “star award” and I can see listeners falling into the “either/or” categories. I’m sure some people will either love this album, or not. One part of me is desperate to award 5/5 stars, and if the whole of the album was as good as the final track, I would do so, but as it is, it doesn’t quite get there.

My advice to people is to give Second Sound a few listens and make up their own mind about what Druckfarben have served up on album No 2. I will certainly dip into some of the album again and again, and I might also use the epic title track as a “long” track on my radio show.