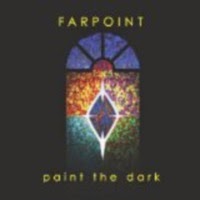 I am no stranger to the band, Farpoint, as they have been featured several times on the radio show after I stumbled across them with the 2003 album, Grace, and more recently with the superb 2011 release, Kindred. Now, landing on The Ancient One’s desk is album No 6, Paint the Dark. Farpoint hail from as far back as 1997, which makes them veterans in comparison with some bands, but relative newcomers compared to others. The music of Farpoint is relatively difficult to pigeonhole, which I tend to view as a “good thing,” mainly because to put a band in a particular category may, in fact, be to the detriment of the spread of the band. They have honed several styles that have influenced them and their music transcends several genres including prog, folk, rock, Celtic, classical and even shades of New Age and bluegrass. (Yes, I did indeed use the term bluegrass!)
The band is a 5 piece made up of Kevin Jarvis (guitar, keyboards, mandolin and backing vocals), Rick Walker (drums, percussion and backing vocals), Frank Tyson (bass and backing vocals), Dean Hallal (lead/backing vocals and rhythm guitar) and Abby Thomson (lead/backing vocals and keyboards). Kevin and Rick were founder members, although only Kevin has been present for all 17 years Farpoint have been in existence. Frank joined in 1999, Dean in 2006, with Abby being the newest recruit, joining in 2011. There are a couple of guests also appearing on the recording and they are Christi Hunter Brownlow on violin and Jennifer Meeks Weich on flute.
Paint the Dark is a 9 track album with a total playing time in excess of 60 minutes, with the final track, “Power” being the shortest on offer on the album at 2:56 minutes. The longest of the available tracks is track 7, “Vision Quest,” running on past the 12 minute mark. (12:16)
The opening track, “Up To You” (7:45) is an up-tempo affair which initially reminded me of early Rush, but this moves into some superb harmonized vocals from Dean Hallal and Abby Thomson over an acoustic guitar theme. Beautiful keyboards and electric guitar themes move the track into a rockier sound but those vocal harmonies soar over the music. There is a return to the keyboards/guitar passage around the 5 minute mark and the constant changes within the music certainly grab the attention. The 7+ minutes actually pass very quickly and this track forms an excellent starting point for the album.
Track 2, “Part of Me” (4:30) takes the acoustic/electric guitar style from the opener and with some superb little guitar runs between Abby’s voice, there is almost a folky feel to the music. The acoustic guitar passages after the 3 minute mark interspersed with those electric guitar moments are very satisfying.
“Gone” (7:44) has a gentle acoustic start which slowly leads into the “laid back” vocal style of Dean with some lovely guitar passages and strings/violin washes. A different style of track, but somehow maintaining the Farpoint sound and also has a little of both vocalists with Dean being the more prominent.
There are little “hooks” running through this track which reel you in very quickly. The last couple of minutes have a very Pink Floyd style guitar sound soaring over the bass/drums with those strings/violins adding to the atmosphere.
Next up is an almost “poppy” style song,”Half A World Away” (5:17), very catchy, but a bit lightweight in comparison to previous tracks, although there is still some of that exquisite electric guitar work. There then follows another change of style with the track “Who Are You” (6:04) which has a superb piano as the lead throughout the track and works amazingly well behind Abby’s voice, before there is a more insistent guitar which drives the track along. The strings also add to the atmosphere of this track.
“Stand” (8:18), “One More Sunset” (5:39) and “Power” (2:55) all demonstrate superb musicianship and remain firmly footed in the gentler side of this genre of music. There are times when, I feel, it would not have been difficult for any of the musicians to “let rip” but the band are restrained throughout but never does this let the music down in any way.
The longest track on offer, “Vision Quest” (12:15) has a spacey feel to the start before the violin suggests an almost medieval scenario, also supported by the drums, and slowly the pace picks up with some superb guitar work behind the violin/strings and the track then settles with acoustic guitar and keyboards. Around the 3 minute point there is a soaring electric guitar passage leading into a terrific acoustic guitar section, with the violin and electric guitar acting as backup and this section also sees the vocals reappear. There is a very country feel to this section with terrific drumming and keyboards. Just prior to 7 minutes, the track merges into sweeping synths with stunning acoustic guitar work and then a majestic flute passage with an electric guitar filling in the background. Terrific interplay between the acoustic and electric guitar moves the track back into the “country” feel again. Some wonderful spacey sounds return after the 11 minute mark and that electric guitar is so “floydesque” as it takes the track out.
Paint the Dark is a superb album and a worthy successor to Kindred. Paint the Dark is an album that transcends many different genres, mentioned in the introduction, throughout the 9 tracks. Once the album has finished, your mind is filled with all sorts of little hooks that have embedded into your brain almost without you being aware of it happening. Stunning playing by all the band highlights the fact that all the band members obviously enjoy what they are doing and that feeling leaps out the speakers at you.
Very simply, a “must have” album, Paint the Dark gets both “One to Buy” and “The Experience will last Forever” stickers on the cover and also comes with an instruction to “clear a space on your CD shelves as quickly as possible.”

Key Tracks: Up To You, Gone, Vision Quest

Tracks:
Up To You
Part Of Me
Gone
Half A World Away
Who Are You
Stand
Vision Quest
One More Sunset
Power