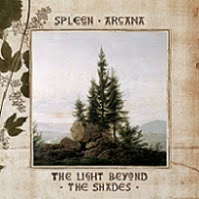 The main driving force of Spleen Arcana, Julien Gaullier is responsible for the vocals, acoustic and electric guitars, bass, keyboards, and percussion.  David Perron rounds it out on the drums and Marie Guillaumet provides the backing vocals.  The Light Beyond the Shades is Spleen Arcana’s second album after their debut with 2009’s The Field Where She Died.

The Light Beyond the Shades is composed of their majestic songs.  “Erin Shores” is the musical equivalent of watching a summer sunset at the beach.  The lyrics and atmosphere of the music evoke images of a landscape painting steeped in Romanticism.  It is an emotional and spiritual song that I think is the best of the three.  “Fading Away” takes things in a slightly different direction.  The space rock and psychedelic influences play a more prominent role.  The distorted and almost robotic sounding vocal sections make the song that much more memorable.

Finishing of the album is the twenty-four minute epic song, “Memento Mori.”  Taking the beauty and emotion of the previous songs and adding it with stellar instrumental parts, “Memento Mori” is a grand achievement reminiscent of some of Pink Floyd’s longer songs, who have been a major influence on Spleen Arcana.  It is by far the most eclectic song, and although I find it to be interesting musically, there are times during the second half of the song where it drags.  It is a minor criticism, because the song is fantastic for the most part.