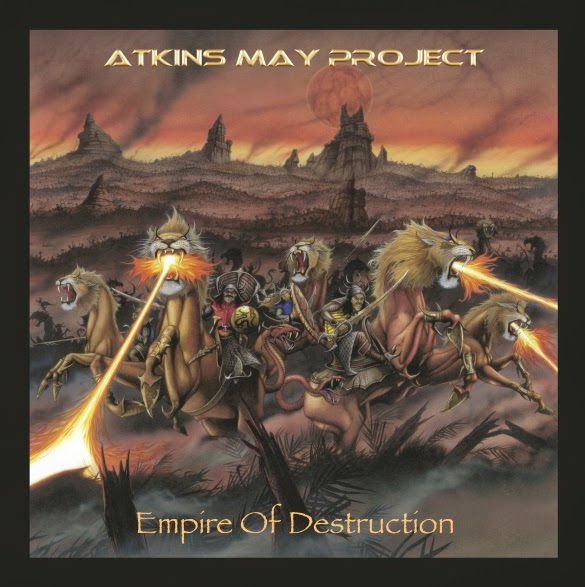 London, UK - After the Success of their first two albums 'Serpents Kiss' and 'Valley Of Shadows', the Atkins May Project returns in grand style, with yet another Colossal Album of Gargantuan Proportions!

Like its predecessors 'Empire Of Destruction' comes once again straight out of the heart of “Black Country” in the UK, the “Home of Metal”! The album continues its Classic Rock theme with enough metal moments to melt your face off, yet features an abundance of imagination and class to intrigue even the most progressive of tastes.

Says Al, “From 'World at War' to 'Whisper to the Wind' it will take you on a journey of battle fields to sombre tears...”

Again boasting a superb collection of immense Rock and Metal tracks with standout vocals throughout from Atkins (sounding like he's gargled with razor blades for breakfast!) To the tasteful guitar work of musical virtuoso May, who still shreds the axe like the old guitar masters themselves. All in all another Authoritative release from these Classic British Rock Merchants.

Says Paul, “Our first album 'Serpents Kiss' set the bench mark for the second 'Valley of Shadows', a mature classic metal affair, that in turn set a much higher new bench mark for 'Empire of Destruction', which has evolved into something I believe will stand the test of time, an to be album to proud of.”

Al Atkins: Noted for forming UK's Judas Priest and fronting them for four years and laying down the foundations which would see them eventually selling 40 million albums worldwide. He also wrote songs for them which went gold like “Dreamer Deceiver”, “Never Satisfied”, “Winter”, “Caviar and Meths” and Priest's all time classic “Victim of Changes”. Al's unique powerful vocal style sites influences by noted rock singers Roger Daltrey, Paul Rodgers and longtime friend Robert Plant. Al has done countless radio and TV interviews worldwide and recently featured in the BBC TV 'British Heritage'. He has even written a book on his musical life about growing up in Birmingham, UK alongside Robert Plant and Black Sabbath called 'Dawn of the Metal Gods'. Al has released 6 solo albums to date, and teamed up with brilliant Christian writer/guitarist Paul May to record their critically acclaimed debut album 'Serpent's Kiss'.

Paul May: Some people learn to play guitar, Paul was born to play guitar! Paul has become respected for his passionate, soulful guitar work and noted for his explosive and exciting solos. As a world class professional guitarist and songwriter, Paul has played and recorded sessions across the globe, touring and playing throughout the UK, Europe, USA and the Eastern block. Paul appears on around 50 albums to date, featured in both the secular and Christian arenas. Paul is also a record producer and has covered the entire spectrum of musical tastes in production.

Now with the release of the new Atkins May Project CD, the dichotomous duo are ready once again to bring their special brand of rock and metal to the masses. If standing in a Wind Tunnel and being hit in the stomach by a bowling ball is your kind of album ... rush out and buy it!

The first 1,000 CD's comes with a limited edition DVD!

Atkins May Project – 'Empire Of Destruction' is available through Gonzo MultiMedia and can be purchased at: http://www.gonzomultimedia.co.uk/product_details/15720