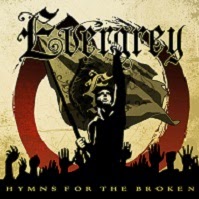 When it comes to making great music, there is no country who does it quite like Sweden.  It must be something in the air, because this northern land is not in want of talented musicians and bands, especially when it comes to making kick-ass metal music.  With their origins in Gothenburg, the same place that spawned such bands as At the Gates and In Flames, Evergrey have been at it since the mid-90s and are in their best shape yet.

Fronted by Tom S. Englund (guitars, vocals), Evergrey has seen a revolving doors of artists come through, leaving Englund as its only original member.  However, this has not stopped Evergrey, nor has it effected the quality of their music.  The rest of the band consists of Rikard Zander (keyboards), Johan Niemann (bass), Henrik Danhage (guitars), and Jonas Ekdahl (drums).  These are a great group of guys and it really shows on this fantastic and intense album.

Hymns for the Broken starts with the short and mysterious “The Awakening.”  This leads right into “King of Errors,” which comes out with a sound that is loud and majestic and sets the stage for the rest of the album.  There is a real presence here with the soaring guitars, the booming drums, symphonic keyboards, and, not to forget, the harmonious vocals.  Everything just fits together so well and so smoothly.

Announcing itself with authority, “A New Dawn” captivates with its hard and crunchy sound.  The chorus really takes it to new heights, as everything is put into the vocals and it is just gorgeous.  Also, it has a guitar solo that will take your breath away. “Wake a Change” takes the album in a different direction.  It dials it down for a slower and introspective pace, allowing for a more emotional connection.  With its symphonic opening, “Archaic Rage” is heavy on the atmosphere and has an incredible instrumental part that really dazzles.

The second half of the album begins strong with the exciting and demanding “Barricades.”  It is like the soundtrack to a dark fairy tale that will haunt your dreams.  “Black Undertow” carries on in the same dark vein as the previous song.  “Hymns for the Broken” is another towering effort, showcasing everything that is right with this band and album.  The music is dark and crushing, and Englund’s voice just towers over everything, creating that extra emotional affect as it is impossible not to hear the heart in his voice.  With the album nearing its end, the punishing sound of “A Grand Collapse” crushes it with its menacing atmosphere. Closing the album out is “The Aftermath.”  Its somber atmosphere and emotional yearnings are practically cathartic after previous songs and makes for a wonderful conclusion.

We find Evergrey in fine form on Hymns for the Broken.  I think that there is not a song that I would consider bad or out-of-place on the album.  They have weathered their hiatus and line-up changes over the past few years very well, and created one of the top progressive metal albums of the year thus far.  I am excited for what these guys will do next. Until then, we have Hymns for the Broken to enjoy.