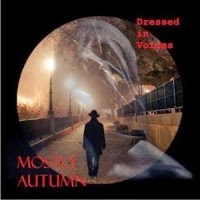 I have just received the latest studio release from the band, Mostly Autumn, called Dressed In Voices (and it is the deluxe version), for review. I can recall reviewing a live release from the band and look forward to hearing what they can do in a studio setting. Mostly Autumn is a UK band formed in 1995, and are heavily influenced by classic 70’s rock, citing Genesis, Renaissance and Pink Floyd as early influences , as well as folk music. The band has released 11 studio albums from For All We Shared (1998) up to this release, Dressed In Voices (2014).

The band at the time of recording this album consisted of 7 members, one of which has subsequently left and been replaced by a person who had previously been a member years ago. On the album are Bryan Josh (Guitar, keyboards and vocals), Olivia Sparnenn (vocals and percussion), Ian Jennings (keyboards, synths and Hammond organ), Liam Davidson (guitars and vocals), Anne Marie Helder ( guitar, flute, keyboards and vocals), Andy Smith (bass) and Alex Cromarty (drums). It is Liam who is no longer with the band, replaced by Chris Johnson, who was a member of the band in 2006/2007.

The 2 disc deluxe edition of Dressed In Voices has a total playing time of around 95 minutes with the main disc, disc 1, the longer of the two at just over 63 minutes and the bonus disc, disc 2, playing just over 31 minutes. The longest track on offer is “First Day At School” on disc 1, which has a playing time of 7:28 minutes and the shortest track is also on disc 1, but appears to be a short link, “See You,” at a miserly 0:23 minutes.

Dressed In Voices is a concept album dealing with a gruesome murder and how that action impinges on the memories, dreams, hopes and expectations. Given the dark subject of the concept, the music surprisingly comes across in a fairly upbeat manner.

I always feel that the opening track to any album is important, but even more so when that album is a concept album. The opening track on Dressed In Voices, “Saturday Night” (5:09) sets the scene for the story that is about to unfold in the following 60+ minutes. An atmospheric start, with street noises and footsteps, merges into keyboards, guitar and drums before dropping into the 2 voices, Bryan and Olivia, backed mainly by acoustic guitar. Just on the 2 minute mark, the sound erupts with the band in full flow, and Olivia’s voice straddles the music majestically. The track then ebbs and flows from band power to the Olivia/acoustic sections and another input from the “natural” sounds before Olivia’s superb voice drives the track to its conclusion.

A piano and Bryan’s crystal clear voice starts track 2, “Not Yours To Take” (5:01) before the band add some clout to the proceedings, together with some very serene sounding strings. The track builds up in presence and then moves into a guitar passage which certainly seems very familiar. The opening 2 tracks quickly draw the listener into the album. They are stunningly sculpted tracks from a band that is working as a very tight unit.

“Running” (4:33) features the main vocals by Olivia, which highlights one of the huge plus points to this band, in that they possess two vocalists who are individually superb but also harmonize in an amazing manner.
As with all concept albums, the music requires to be heard in its entirety to fully appreciate the scale of what the band has achieved.

The longest track on the first album is “First Day At School” (7:28) and is another example of a simple backing of piano and strings, fronted by the male/female harmonizing. Sparse, stunning and beautiful, this track begins to build after the 3 minute mark and morphs into a solid driving song, complete with little “hook” passages. This is a track of contrasting halves, both combining to provide a super 7+ minutes.

This is a tremendous album which seems to have brought together the perfect fusion of their influences. Previous albums have hinted at this fusion, but, invariably seemed to fall into the prog folk or the heavier side, but this is an example of a band “getting it right.” The band weave between the melodic, symphonic, heavy and Celtic influences seamlessly.

As an additional plus, apart from the 63 minute concept album, there is also the 30+ minute bonus disc containing another 9 tracks.

Dressed In Voices, I think will be an album that is a revelation to the followers of the band, having crafted the perfect album. Yes. I did use the word “perfect,” as this seems to be what the band have been striving to do and now, they have done just that. As a starting point for people who do not know the music of Mostly Autumn, Dressed In Voices is an excellent entry into their world. The album gets better with repeated listens and both stickers, “One To Watch” and “The Experience will last Forever” adorn the cover of this album. Be prepared to create a space on the CD shelf once you have given Dressed In Voices a listen.

Key Tracks: Not Yours To Take, Running, First Day At School

Disc 1:
Saturday Night
Not Yours To Take
Running
See You
Home
First Day At School
Down By The River
Skin On Skin
The House On The Hill
The Last Day
Dressed In Voices
The Library
Footsteps
Box Of Tears

Disc 2:
Silhouettes Of Stolen Ghosts
Wastelands
Teardrops of a Flame
Dance Till The Dawn Invades
Stepping Stones
Would You
One You Mean
Skin On Skin
Lady Rainbows
Jim “The Ancient One” Lawson-Sr. Reviewer Prog Rock Music Talk